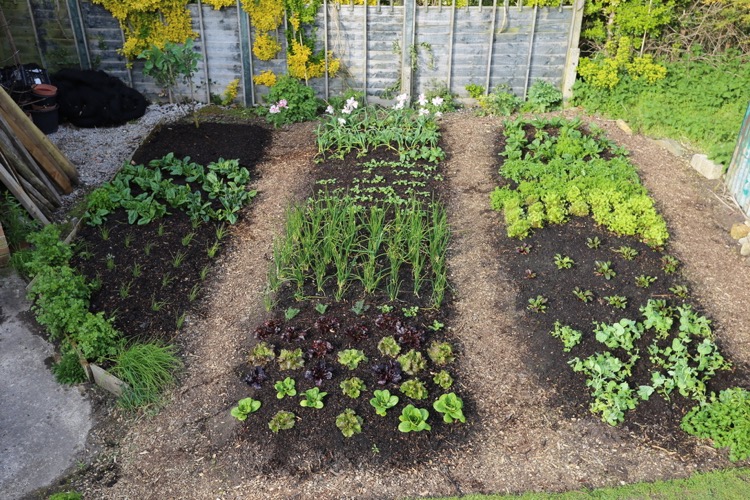 A season change is happening and most of us can make new sowings undercover of vegetables that need summer warmth to germinate and grow.

The frequency of cold nights is reducing but you need to know your last frost date. In London and big UK cities this has mostly passed, likewise near coasts. Whereas gardens in rural valleys, such as Homeacres, may (or may not!) experience a frost until mid May. Therefore I raise frost-sensitive plants in the greenhouse until then, after germinating them often on a windowsill.

Sowings to make now include courgette/zucchini, winter squash, summer squash and cucumbers you plan to grow under cover. These are all fast growing cucurbits so after about two weeks, be prepared to pot on seeds from modules into say 3cm pots, and give them more space.

Sweetcorn, tomatoes for growing outside and basil are also good to sow now undercover.

Sowings I don’t make yet include French and runner/pole beans, and cucumber for planting outside. They need full warmth, and May sowings of these grow more healthily than April ones.

This category of plants include many that are already growing outside, such as onions, lettuce, peas, broad beans, spinach, cabbage, broccoli and coriander. Check my sowing timeline for when these are suitable to sow again, or others which are especially good to sow now, such as leeks, chard, and leaf beet spinach.

You can also sow kale, Brussels sprouts and autumn cabbage now, but I prefer to wait until May 10th before sowing them, because then I can set them out after clearing overwintered spring onions and salads, or spring sown spinach. Or the Brussels we plant between carrots which are cropping.

There is still time to plant seed potatoes, even if they happen not to be chatted. I find that Charlotte and other second early varieties planted now can often be ready to harvest my mid July. We still have some Charlotte in sacks, from last summer’s harvest, such a useful vegetable!

Parsnips also can be sown until June, as long as you keep the bed moist until seedling leaves appear, at least two weeks. See Weeds below, best sow in a weed free surface.

Beetroot are looking great and thanks to compost mulch with no green manures, forking or covers, there are few slugs and no damage to leaves.

New video on fleece and mesh

Edward and I filmed this video on a wet afternoon, a rare event recently and there was only 3mm rain on that occasion. So far we have had 30mm/1.2in in April and the ground has been drying on the surface in east winds. This helps reduce slugs, and means you need to water new plantings until they have got some roots down into the moisture below.

This weekend may be 21C/70F in parts of the UK and it may be worth removing fleece covers between Friday and Sunday.

The no dig broccoli has rooted well and stood up in the gales. No dig means no soil disturbance, no forking, just leave soil life to build structure. Feed soil life with compost, which harbours no slugs.

Sarah Raven hosted me teaching no dig at her lovely garden in Perch Hill Sussex, and I shall teach the same next year at Perch Hill, 8th April 2020. They have a lovely compost palace which people mistake for a wedding venue.

The dig bed continues to underperform, but not for all vegetables: mainly brassicas, beetroot and peas, the same as last year.

Potatoes look stronger on dig, as are the weeds. Watering is more difficult/slower on the dig bed because new water smears the surface soil, making the water run sideways.

Perennials – Keep removing any new growth of perennial weeds, especially bindweed which is revving up as soil warms.

Annuals – If you see a lot of new seedlings, run a hoe or rake through the surface to dislodge them, on a dry day. Then they die in situ.

All weeds can go on your compost heap. My online course has a lot about clearing weeds, no dig. I just received this course feedback from a student in Hamburg:

I really enjoyed the course. I wasn´t sure what more than in your Youtube videos could be in the course. But now there is the whole picture, all the pieces fell in the right place.

I was upset to hear of poor growth except for potatoes and onion sets, from someone who had spread (fresh) wood shavings over the compost, Generally I don’t recommend this for vegetables, whose new roots are so near the surface and may suffer from nutrient competition. The potatoes and onions start off deeper and below the wood, so were not affected.

On the other hand you can use wood mulches around perennials and fruit bushes, whose roots are established and deeper.

The first two photos are by Jason Ingram who is here monthly for my series on the family garden, in Which? Gardening 20120. My current series on no dig is featured monthly this year.

The no dig courses at Homeacres continue to sell out, but there are places still for compost making and using on June 1st, and “next level” on June 8th. Both of these courses include a lot of information about no dig fundamentals, namely getting soil fertile and weed free.

Also in June is my talk about no dig in central Bristol at the Tobacco Factory Theatre. Before that I am giving a day course in NW England at Marbury Hall.

It may be time to hang up your spade