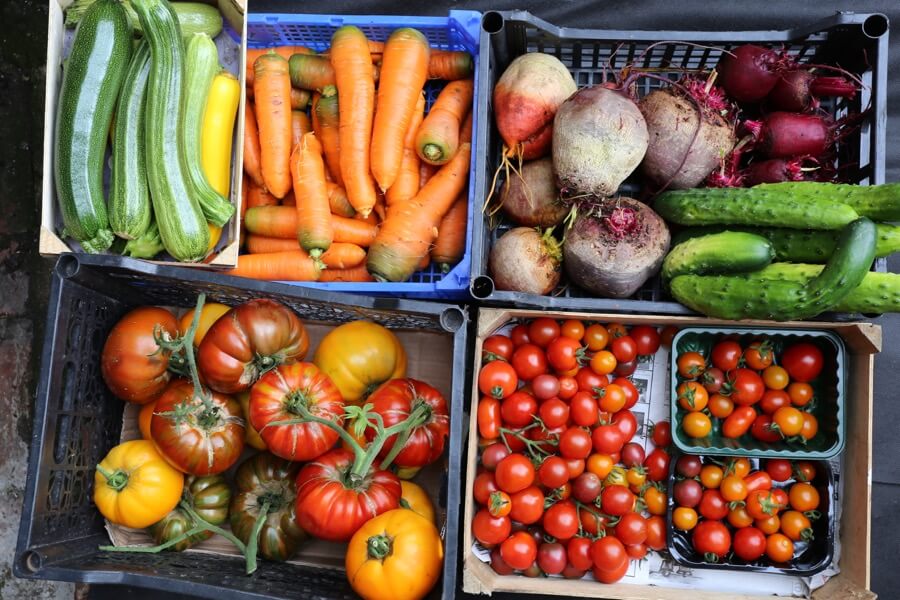 There may be some fine weather in August’s last week: St Swithin’s 40 days finishes on 24th. Here we have been watering salads a little, having been quite dry recently, but not sunny.

Flowers at Homeacres continue to be gorgeous, and the colours of vegetables are much underrated I feel. See next para too.

Growth in high summer is so, so fast, and I love how brassicas suddenly take off about two weeks after planting. The red cabbage are drawing ooh’s and aahs’ of admiration from visitors, but red cabbage are funny things and I am not counting my hearts until they are well formed and dense. We planted them 20th June after clearing broad beans, no compost or anything else has been spread there since November.

You can now sow cabbage to heart in the spring, or wait until the last week of August in the southern UK. Spring onions are good to sow now as well, and continue sowing racket, oriental leaves, land cress, coriander, chervil.

Why less weeds in no dig?

A trial in Pennsylvania shows that weeds germinate and grow less when just an extract of compost, with its microbes, is added to soil. It’s the ecology, stupid! and to be precise this finding ties in with Elaine Ingham’s discovery that high fungal populations near the surface are a discouragement to germination of pioneer weed seeds. More about her work here. Thanks to Steph and FB group Undug for the Pennsylvania link.

Growth in my garden continues to surprise me even in my sixth decade. Plants growing in undisturbed and well-fed soil just want to please us. Well fed means the soil life is well fed, not that I add or recommend adding fertilisers, even organic ones.

New videos include advice on saving seed and watering. Both are topical now, plus here is an excellent book on seed saving.

I was delighted to meet Huw Richards and he interviewed me for a video on his channel, coming out late August. He is just 18 years old and completed A levels this summer, is committed to learning gardening and helping others to succeed, and works from his family’s smallholding in Tregaron, West Wales.

Edward has just completed mammoth film and editing sessions for Fifth Summer, our sequel to Fourth Summer which has proved so popular,, it’s two thirds of the way to a million views. Edward is keen to show his new skills in filming and editing, though even with everything well planned we were caught out one morning by some gusty winds on the microphone.

It is exactly one year since the BBC filmed here and I made the little bed for Gardeners World, see the April programme here and the bed making is at 23min. This year the bed has grown Gourmande potatoes, and i was shocked on 13th to discover some blighted tubers, even though the leaves were mostly healthy. I recommend harvesting most potatoes now, except for late maincrops; otherwise you lose more than you gain, to blight and slugs. And after the harvest, you can plant more vegetables.

We shall plant either fennel or oriental leaves on that bed, perhaps spinach too. And we planted lettuce after onions.

Steph enjoyed an early morning pick of fruit and veg. She lives in an ex-council house with its long back garden, which is now a quarter full of polytunnel!

I have compared growth of an F1 pepper Magno, to a German variety Roter Augsburger. The Magno started well but many peppers formed at once and the plants then took a pause before fruiting again. The RA has cropped a lot throughout, peppers of lower weight but colouring up willingly, and sweet.

The trial has been fascinating as ever. Mostly the no dig bed is ahead in harvests, but three exceptions have been peas, potatoes and carrots, more details and photos here. Legumes always grow 5% more on disturbed soil, in my trials. But in 2016, no dig gave more potatoes and carrots, so it’s hard to predict and more fun for that.

I noticed how growth on the no dig bed was slower than usual after harvesting potatoes in late June. I imagine the fungal networks were damaged by the potato harvest, see this Washington Post article on soil for more on that.

No Dig Organic Home and Garden continues to fly, last week we were pleased to see such a high sales ranking.

We are selling it off my site cheaper (£16.95) than Amazon, and my perennial Diary is cheaper too at £10.95, it will be great for Christmas presents. Not to mention my bargain deal for Winter Vegetables, just £9.