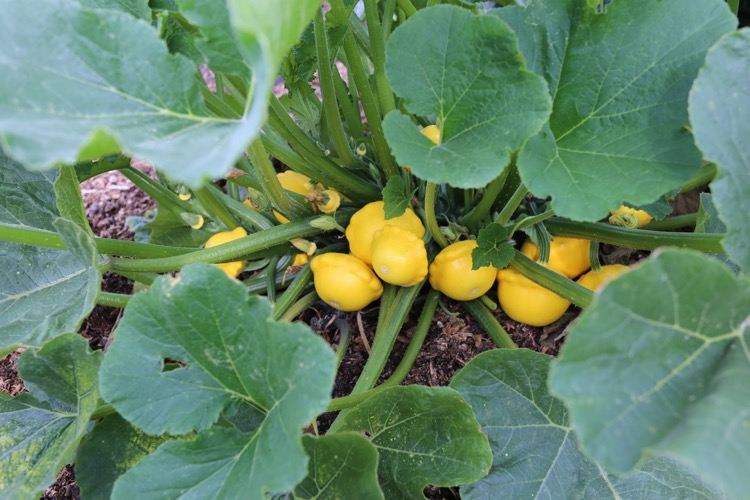 August can be a second spring in the garden, when it rains. Here its desperately dry after only 19mm/0.7in rain in the last six weeks, and we are watering many vegetables. However the grass is less brown than in 2018!

The photo is summer squash Twinkle F1, from T&M seeds

Early August brings us to a fantastic time for sowing salad rocket, pak choi and other oriental leaves, for both autumn and winter harvests. I have not sown these since last autumn and look forward to their reappearance in the salad mix, now they are in season for growing leaves not flowers, and with less flea beetle damage.

Then around 10th August is my optimum date for sowing (true) spinach, the prince of vegetables, which crops for seven months when sown in August – this is it’s sowing moment! I recommend Medania, see about saving its seed below.

Land cress is good to sow by early August and after a slow start, it often survives and crops until its flowering time next May. It survives frost and snow without any protection, except a net against pigeons, and the leaves taste of all the iron you need to steel up for winter.

Towards the end of August is good to sow spring onions and spring cabbage, to overwinter as small plants which bulk up next spring, when you will be so glad you remembered to sow them in summer.

At the last weekend course I demonstrated dibbing holes and planting modules, deep! Then everyone had a go and enjoyed feeling how quick and simple it can be. There is no need to fill the dibbed hole after planting, because watering does that, and still leaves a slight hollow where the module is sitting, making it damper around the roots and with less chance of modules drying out, in the few days before roots can grow into surrounding soil.

There is another weekend course on 24th-25th August. September’s day courses have just a few places available.

In cooler areas, you can increase tomato yield by picking fruits half ripe, so that plants can then use their energy to grow and ripen more fruit. However this means some loss of flavour. It’s same story for picking peppers green rather than waiting for them to ripen, which can take a long time in the UK!

August 10th is a key date for tomatoes – pinch out their tops, then continue to remove side-shoots. This ensures that plant energy goes into existing fruits, rather than new trusses which wouldn’t have time to ripen before the ‘devil spits on them’ (due to reduced light levels) in mid October.

This is harvest time, if you have not already. Once you see a few plant stems fall over, best pull all onions and bend the necks at 90 degrees to help develop a thin neck, and better drying of the bulb.

An issue may be some onions boiling, and they want pulling and using soon, before the flowering stem becomes too hard, inside the onion. I have that happening at Homeacres, on just one variety Lilla, red onion grown from seed.

Another issue may be mildew on leaves, and best pull all onions asap if you see this, and use before too long and they will probably go mouldy before winter. I have this on Lilla!

Harvest from now any of peas, broad beans, tomatoes (not F1) and lettuce if they are in a polytunnel. Lettuce outdoors need probably another month.

I pull out the whole seeding plant once most of the seed-heads or pods are say 90% dry and seed-like. Then I hang plants in the garage until we have time to thresh or knock out the seed. I had a few mustards for green manure seed, which we walked on over concrete to break seed out of the small pods.

When we pulled the spinach, there was a lovely toad in the compost surface, under a rootball. The spinach seeds need rubbing off stems.

Cover carrots with mesh by mid August, to prevent laying of eggs by root flies. See my video on using mesh in the summer.

Brassicas suffer a lot of insect damage in summer – sometimes one just has to accept it, as long as plants survive, and can then grow strongly in autumn’s cooler and damp weather, which they prefer.

Remedies against slugs are:

For rabbits we use mesh or bird netting, over susceptible plants, mainly seedlings. I have run out of wire hoops and sometimes it’s fine to lay mesh directly on the plants.

For protection against caterpillars, the powder of Bt soil bacteria has become difficult to buy in the UK, except for half kilo tubs from Ebay, with instructions in Italian.

The dilution rate is about one level teaspoon per litre of water. Just give a light spray of leaves, so no surfactant is needed. It’s best applied in cloudy conditions, and to all brassicas you want to protect from caterpillars. Possibly also into the hearts of leeks if you are concerned about moth damage, and are not using a mesh cover –

We give main water to new transplants in their first 5-7 days, salad plants and fruiting plants. I aim to give a decent watering say twice a week, rather than a light watering every day. Water is from the mains supply, given with a hose. The water butts dried out a long time ago.

Wish I did not need to write about this. Check my new video for information about this powerful poison.

Most damage shows as curling new (growing point) leaves on tomatoes, potatoes and beans – these are the worst affected vegetables. You see new leaves curling inwards, leaves yellowing between the veins and stunted growth. The aminopyralid causing this will break down in time, but has a half life of perhaps more than a year, depending on temperature.

I have seen damage at prominent local gardens, and my own, from grass made into hay that was sprayed and fed to horses. On the herbicide containers’ label it says to use for cattle and sheep only. It’s claimed not to affect horses but who has checked this? Not to mention humans.

This poison may also be in green waste compost, if gardeners had taken sprayed lawn clippings for recycling. See how bad it was even in 2012 when Westland’s compost was often mentioned in comments to this article in Which? Gardening. In 2019, Westlands Jacks Magic and New Horizon have caused problems, among many others.

Ways to grow and pick broad beans, showing results of sowing both autumn and spring