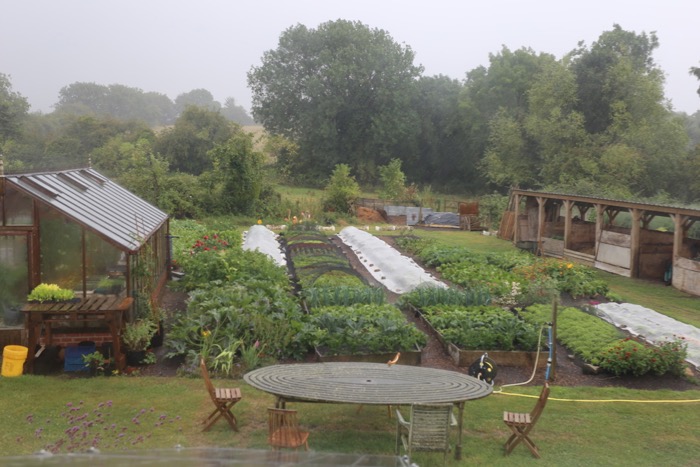 Writing this in a thunderstorm, our first substantial rain for two months of lovely warmth, over 40mm so far and 46mm in the end (1.9in) in four hours. All soaked in, watering finished for 2019 except for new plantings and undercover.

Do come if you can, free entry, dogs on leads and no digging, teas in nearby chapel. More details.

No dig in Essex, before and after

See the transformation of Jack Hodgson’s patch in Essex near East London, between January and July 2019. He had been gardening on an allotment for a few years, working as self employed electrician, still does some jobs but now mostly market gardening on about 700 square metres. He wrote:

I had experience in growing but doing your course back in December gave me the blueprint and idea on how to make that blank canvas of a field work the way it has. Also your multisowing seeding in cells has been very successful. My chefs are loving the produce. My weed pressure is so low. The soil was clay. Had plenty of stones in and I could only get a pitchfork in half way.
See the beet root going into undisturbed clay – dense, firm but not compact. Discover more @jacks_patch and check out Homeacres courses on this page.

What a terrible summer new plantings of brassicas, faced by record numbers of flea beetles, swede midge, stem flea beetles and caterpillars. I have found that June plantings (photos below, same day as we had cleared broad/fava beans) fared better than July plantings, whose leaves were more tender in July and that is what the insects love – new leaves.
Mesh has helped so much and if you managed to bring your new brassicas through July and to be still alive now, they should grow fast in the August rain and cooler weather (UK at least, sorry Texas!).

August is second spring, so many sowings are good now. Including salad rocket, mizuna, land cress, chervil, coriander, endive and spinach (Medania if possible, lovely dark leaves). Then at month’s end spring onions and spring cabbage.
If you sowed recantly you could have plants to pop in of fennel, lettuce, savoy cabbage and brokali.
My new calendar (pub 31st August abw) and Diary (pub September) have these dates laid out, with timesaving information as well.
Photos below by Johannes Pelletier from Austria, here for 10 days as a volunteer. Arrived 22.50 and started picking 05.30.

One bed results of having plants ready

This bed is cropping a range of veg all the time: see the change from March to June to August. Interplanting too, such as fennel between spinach then beans between fennel. Don’t let anyone convince you that fennel is unfriendly to other plants.

I just uploaded no. 10 in the Small Garden series. Next weekend, the long harvests video showing how we do that and with flashbacks to olden times when I was young.

Plus my new online course will be full of videos on how to grow many veg, from seed to harvest, releasing in January 2020.

I hope you have pulled yours mostly, Here we caught the last of the dry weather for drying them on the beds, then we could cut off most of the leaves and lay them under cover on trays to dry some more. I shall hang a few in the house, where they store the best.

Wheelbarrows of soil and compost spread in March by Leon Schleep, with cardboard only under some edges and at the end where couch grass and bindweed are strong.

We had good summer harvests and the bed is now planted for autumn and winter. The envirotect cover is against leek moth and chicory rabbits.