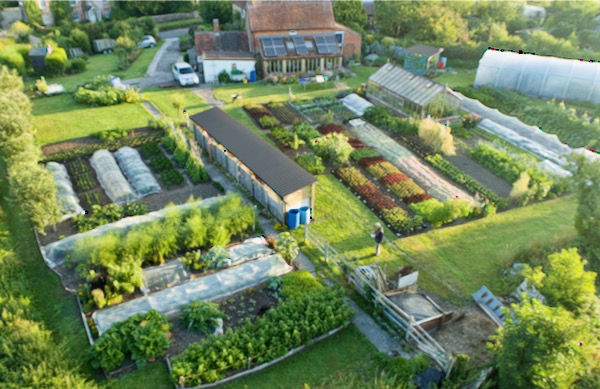 It’s a rainstorm as I write and I am grateful for it. Before today, July’s total rainfall was 29mm/1.2in and after this storm it’s 46mm/1.8in. Still below average. We have been watering, and now can do less of that for a while.

July has been the coolest since 2012, and less sunny than normal. But growth is good, after a warm spring and early summer which got everything to an advanced stage already. Summer vegetables are on.

Before month’s end is good to sow coriander, chervil, bulb fennel and Chinese cabbage. Then spinach and salad rocket before mid August, a busy time indeed. Learn more about how to do all this in timesaving ways, in my online courses.

No dig is key: we spend little time weeding or feeding. This link has some scientists finally catching up with what many of us have known for decades. Once there is “scientific validation”, things get taken seriously! They call it a ‘radical new way of thinking’ – common sense no  dig and no till.

I love how fast growth is in July, except for making us so busy.

On the other hand, the sun gives us energy, so all is well, and days are long. The garden is taking 75-85 hours of time at present, of skilled input.

Showing a smaller growth difference is a heap of soil near the cabin. Less goodness for the roots.

This is a fine succession, as long as you have leek plants ready, from an April sowing usually. I multisow in modules, then pot on to keep them growing.

The potato harvest was lovely, and we made a video about it. In the video (on You Tube this winter), the harvest is preceded by how we made the new beds on grass and weeds, in December. There is still some bindweed and I keep pulling it: the couch grass is not growing any more.

How is this allowed?

My work as garden teacher brings me in contact with problems which make me so unhappy. I hesitate to mention this because it’s so worrying but I conclude there are forces of evil to contend with.

The issue of pyralid weedkillers is one such. In a friendly world, such a poison would simply be not allowed. Or at least would be acknowledged and dealt with, when its damage is seen. The photos are to indicate damage you may see, and need to recognise. It’s not mineral deficiencies or root problems! See compost problems below.

Glyphosphate is shocking too, and is clearly, scientifically explained by Dr. Zach Bush MD in this video, or just listen as a podcast. It shocked me.

Here is a link to herbicide damage on potato leaves, to help you identify problems caused by weedkillers. It’s from the University of Minnesota Extension service, kindly sent by Lisa Munro.

No dig and soil microbes for health

For a cheerful antidote to the above – Emily Murphy of California sent this piece in the Washington Post 29th September 2019 Here is an excerpt:

“Throughout most of his career, Robert Beelman has focused his research on quantifying the antioxidant content of plants and describing how these nutrients affect our own cells. But recently, Beelman, an emeritus professor of food science at Pennsylvania State University, took an unorthodox step for a nutrition researcher by expanding his investigation to include soil.

“We all say that healthy soil equals healthy people,” said Beelman, “but the truth is that we are still blowing smoke and we need to do more research to investigate this idea.”

“I got to wondering,” he added. “Have our modern agricultural practices been screwing up the fungal and bacterial populations in the soil to the point where the amount of [nutrients] in our diet has been compromised?”

This is an interesting nutrient because it is only made by soil fungi and certain soil-borne bacteria, while several lines of evidence suggest that Ergo is an important nutrient for humans: Ergo deficiency might predispose us to inflammation and premature ageing. Ergo is found in many plants, including oats.”

Their study conclusion on adjacent farms, one tilling and one no till: the no till oats had 25% more ergo than those grown in tilled soil.

I feel that Homeacres vegetables are bursting with health, thanks to the soil quality. In the trial beds, most plantings look stronger on the no dig bed, with more lustre in their leaves.

If you can keep insects off summer brassicas, they can grow exceptionally fast. Even as second plantings, after a first harvest. I do not add compost in summer for these new plantings. In the undisturbed soil, they are quick to do and easy to maintain, with almost no weeding – mainly blown-in seeds of dandelion and sow thistle at this tie of year.

What is going on in the compost trade! There are so many upset gardeners, myself included, with unforeseen problems.

One cause is weedkiller residues, These used to be mostly from farmers’ hay fed to horses, but now it’s from sprayed grassland generally and is in cow manure too. PLUS it’s from lawn clippings of grass treated with pyralids, which end up in in green waste compost. Unseen and unmeasurable, a horror show for compost makers.

The other cause is improper composting of woody matter in peat free compost, resulting in poor nutrition and weak plants. I have heard many comments about returning to peat, a contentious issue which therefore needs much work please from compost companies.

I have a persistent wild rabbit and keep filling in potential burrows. We net new plantings in case of nibbling. On the other hand I am lucky to suffer no pigeon damage.

My tomatoes are not brilliant, especially the cherry types. I shall say more about this in autumn, once it’s more clear what has happened.

Homeacres homemade compost is turning out so well. See my recent video if you have not already. The video is my second-most popular in its first week (after Start Out No Dig) which reveals the interest in making compost.

The problem for many gardeners is sourcing enough material. A good alternative is to enquire after wood chips, especially of you have space to store a pile for a year.

The warm dry spring was ideal for onions, followed by June rain to increase bulb size. I am pulling them as soon as possible, to take advantage of summer warmth for drying the tops. Bending necks is worthwhile to help them dry and store better, with dry tops eventually.

Be ready with transplants for when your onion area is clear.

The Rose de Roscoff are so precocious. Now safely in the dry, gorgeous pink onions.

We just picked the lettuce to right of the onion bed, on 24th July. I transplanted them 25 days earlier. They were slow to start from being too dry, now are good and should crop for eight more weeks or so