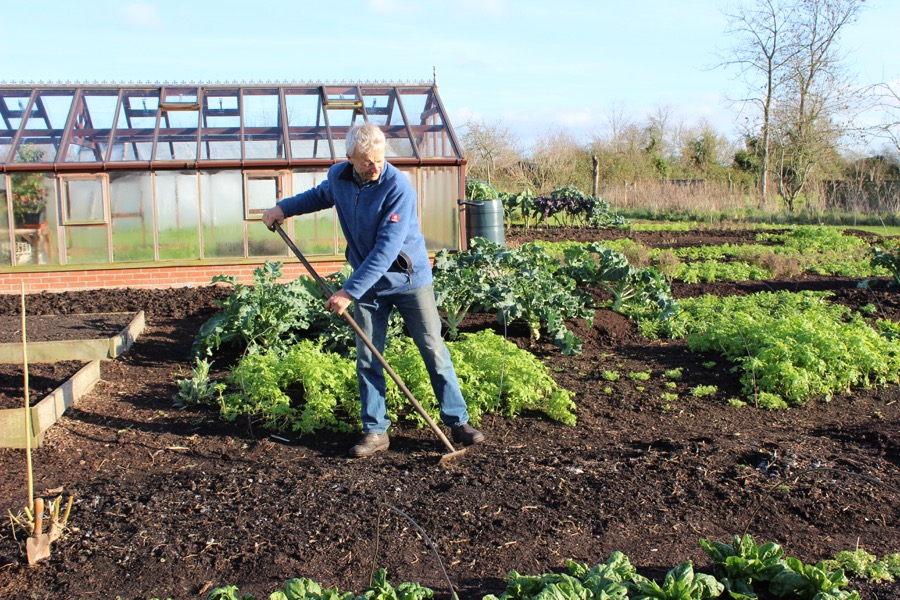 The taste of home-grown Brussels sprouts, they are just so delicious!! and they look beautiful both in the garden and on the plate. For us they are a culinary highlight of the winter and this year, although there has been less frost than usual, they are tasting superb. Cold weather makes them produce sugars as frost protection, so in this super-mild December they are less sweet than normal, but their other flavours are still good.

To keep Brussels plants in good shape, continue removing any lower leaves as they start to yellow, to reduce chances of rotting and slugs being attracted.

Parsnips are another great winter veg and the photo shows 6.5kg White Gem which I levered out of just 13 square feet (1.2 sq. m) of undug soil. Its a lot of food from a small space and parsnips fill you up because they are denser than potatoes with much more dry matter, hence their ability to withstand frost. My yield is higher from spreading 2in compost (it was green waste with food waste added) last winter – its another myth that “compost makes parsnips fork”, as you can see in the picture!

Another year of this trial has concluded, follow the link to find details including a table of 2015’s harvests- and values. After the final harvest of kale I again dug the left hand bed, and incorporated two inches of compost in each dug trench, about 8in (20cm) down. On the right hand bed I simply spread the same amount of compost, which takes three hours less than digging, saves my back a lot of aching, and gives slightly better crops, whose leaves often look glossier and healthier.

So why do most gardeners still perform the annual dig? The only time I can see its worthwhile is to dig in weeds rather than waiting for a polythene much to kill them – but even that you can do with compost, and digging is rarely effective against rampant perennial weeds. And as a routine chore, it really puzzles me. Is it because of a belief that there is no gain without pain?

Its been a vintage celeriac harvest at Homeacres, my best ever, both of Monarch and Mars, seed from Bingenheim. From an 11 foot length of a four foot wide bed, the harvest was 124lb, so that is 2.3lb per square foot. Or in metric, its 56.4kg from 5 sq. metres which is 11.2kg per sq. metre.

This results simply from applying 2in compost (in this case some old animal manure & some green waste) on top of fertile and undisturbed soil. I sow celeriac seeds mid March in warmth, aim for sturdy plants by mid May, cover with fleece for three weeks after planting unless its hot sun, keep plants watered in dry weather, barely need to do any weeding – and that’s it! Harvesting is the longest part.

I find that celeriac is easy to store, now they are in crates in my shed which is a brick-walled annexe to the house, draughty and not entirely frost-free, depending on winter’s severity. Currently its too mild for winter roots in store, for example beetroot are sprouting. I have left some in the ground as a comparison.

If slugs are not a problem, you can use mulches of less-rotted organic matter, but compost is best for not offering habitat to slugs. Vegetables need fertile soil and compost/well rotted organic matter is the key ingredient, unless you have a plot large enough to set aside an area to grow green manures for fertility.

My average, annual dressing is 2in (5cm) of mature compost, but its difficult to measure so the photo should help. I reckon that you want to cover soil so that, just after spreading, no soil is visible. Then after some rain and the compost ‘settling’, it will look less deep, and will often be just a one inch layer by spring.

Quality of compost makes a difference too, I spread less if its older and fine as in the photo on right. I find that quality improves if I turn a heap about a month after its last addition of new ingredients, as in the middle photo which is a heap I just turned and shall use in the polytunnel next May.

A mature no dig garden grows very few weeds. I reflected on this while picking salad in the polytunnel where the only weeds are occasional seedlings of buttercup or grass (and bindweed in summer), which we remove while picking. The surface compost always looks clean and neat around the vegetables. This saves so much time.

Outside there are a few more weeds to pull, from seeds that blow in, but its not a big deal. However Steph has been plagued by this on her allotment where the neighbour did almost nothing this year, so all the nearby allotments were showered with weed seeds, until a man took his trimmer to the plot. (The council let that happen, they are clearly not gardeners, and they are letting down those on the waiting list for allotments.)

The other source of weed seeds is newly-applied compost but don’t let that put you off! Weed seedlings are easy to deal with as long as you act when they are small, by running a hoe or rake through the surface on a dry day in early spring. The vital part is to do it when weeds are tiny, so they quickly die on the surface by the hundreds and thousands, in an hour or two of spring sun and wind.

I grow for flavour and am not convinced by mashua roots (Tropaeolum tuberosae) – is anyone else liking them? The plant gave 2kg so no problem there, also its leaves are tasty in salad and the November flowers are sensational.

Dahlia tubers look promising but are stringy and fibrous, without a huge taste. I followed James Wong’s roti recipe and they taste ok but most of the flavour came from eggs and flour (freshly ground rye) and I struggled a bit to digest them, maybe from the fibres.

Fortunately, oca and yacon continue to impress, for example they are superb simply when roasted.

I had to harvest my swedes as they were in the dig/no dig experiment and the dug bed needed digging (another advantage of no dig). Otherwise swedes can stay in the ground, they are so winter-hardy, even in Scotland. My roots have many stems because gall midge took out their main growing point in June, the plants looked knackered, then recovered, but for once damage was worse on the undug bed.

In contrast to that, kale on the dug bed had all the November caterpillars and there were none on the kale of the undug bed.

For other winter veg one you can mulch them with compost at any stage, then after clearing in the spring you are ready to resow, replant into the weathered and more crumbly compost.

But there is less light than in spring, with just 8 hours between sunrise and sunset. This shows in leaf quality, they are relatively thin and flimsy. So the thicker leaves of radicchios and endive are a great contribution to winter salads. We have also been adding some heart leaves of Chinese cabbage which I sowed late July and planted after a harvest of dry broad bean seeds. I cut the cabbage hearts in late November, just before the first frost of -3C, all explained more in my salad book.

We are doing the year’s final pick on 23rd December, taking more leaves than usual to leave plants small over the holidays and give us a break from picking.

Mid May 22 many new plantings, make lots of compost, my trials of propagation and other composts