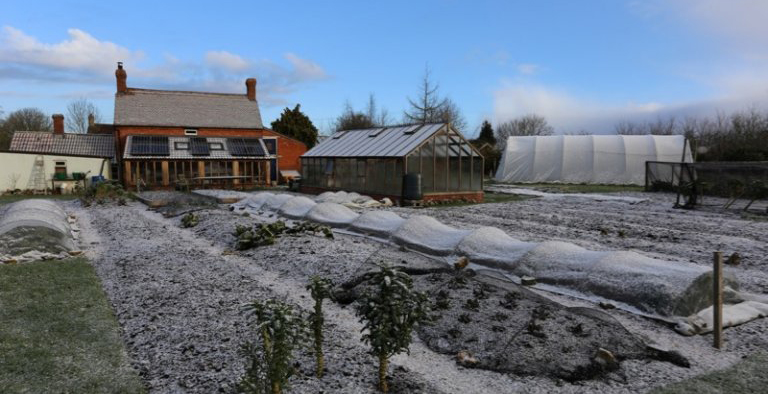 Early sowings… it’s still early! The beauty of spring is that there is always more light ahead, and usually more warmth (!), so later sowings often catch up. As well as that, they grow more healthily from being less subjected to cold winds and frosty nights, which we are sure to see plenty of yet. “As the days lengthen, so the cold strengthens”, – though not all the time. Read on to see what you can do now.

[Links are to videos]

The sun’s returning strength, initially for just a few hours each day, helps seeds to germinate and then grow healthily. Outside it’s too cold for this but under glass or plastic, seedlings will grow into sturdy plants that can go outside in late March, under a cover to protect them from winds and pests.

An example in both of the last two springs was my mid February sowing of spinach, in modules in the greenhouse. Despite the many spring frosts, we took a significant first pick of large, healthy leaves in the hungry gap of late April, when green vegetables were in short supply. The same plants cropped until mid June. Sow true spinach not leaf beet, for the tastiest, dark green leaves, delicious raw as well as cooked.

Use any windowsill to germinate seeds. Germinating seeds do not need sun, they need warmth, so you can also put seed trays in a corner of any warm room, until you see leaves popping up.

Other leafy and frost-hardy plants to sow now are lettuce, spring onion, peas for shoots,, calabrese, early cabbage varieties such as Greyhound, coriander, parsley and dill. Do try a new variety of coriander, Cruiser, which crops for longer before flowering and grows large, fleshy leaves.

Root vegetables to start undercover are radish, turnips, bulb onions and Boltardy beetroot. Multi-sow them in module trays, to plant with their friends in clumps of average four plants/clump, for medium-sized bulbs. Multi-sowing saves greenhouse space, compost, and planting time.

There is no rush to sow tomatoes now, because sowings around mid March soon catch up earlier sowings. Plus they make sturdier plants, without the ‘legginess’ of early sowings grown in less light. Only chillies, peppers and aubergines benefit from sowing this early – see Steph’s take on the aubergines she loves.

And for any who prefer to buy plants rather than seeds, I recommend the mouthwatering selection from the greenhouses of Organic Plants. The Cabbice cabbage is one of my favourites, so are the Black Pearl grafted aubergines, which give huge yields here.

The salad veg in this strip of 3 beds (photos show the middle one) are not only hardy, but they make new growth in winter! We are 51N so winter sun is hardly ever there, but the average winter temperature here Dec-Feb has been 3C/36F by night and 9C/48F by day, higher than usual.

These mustards, spinach and corn salad were planted 26.10 after clearing summer beans, then compost spread. The strip is 1.2x7m/4x22ft and has yielded 3.4kg/7.5lb leaves already, of saleable quality – I don’t weigh the rejects.

The mesh cover has kept the worst of the winds and hail at bay, and is protection from rabbits. Next week, now that the sun is stronger, we shall remove the mesh + hoops, then cover the strip with fleece, sitting on the plants. They will crop until late April, then we twist them out and the area becomes all ready for climbing beans, sixth year consecutive, part of my no-rotation trial.

Other of my salad plants are doing well without mesh or fleece: mizuna, coriander, chervil, land cress, Claytonia and corn salad among others. See photos below.

After being in drought-hit Cape Town recently, and hearing news from California, I view our ‘high’ rainfall with gratitude. However, “February fill dyke” has only just lived up to its name, after a winter of above average rainfall, here at least:

The winter rain followed a drier than average autumn here, so we need it to replenish streams and reservoirs. And on a no dig plot, any lying water is temporary (I took the photo while it was raining), because you have not interfered with the drainage by digging!

Incidentally, it’s a big myth that adding sand or gravel improves drainage. Makes concrete perhaps! and more seriously, any layers of mixed density impede drainage where water makes a capillary barrier between materials of different densities. For this reason, do not put gravel/crocks in the bottoms of pots! 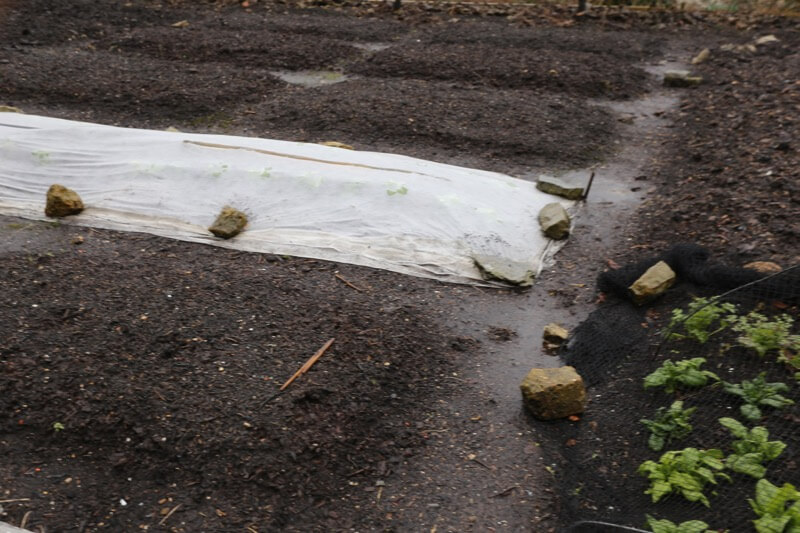 Steph’s latest blog has insights on moon calendars, patience before sowing, plant labels, frogs and her love of growing aubergines.

The FB Group she began four years ago, No Dig Gardening Undug, has grown beyond our imaginings, over 11,000 members now. It’s a lovely place to learn and contribute, and is based on compost mulches for damp climates, not straw or hay, of which there is enough in permaculture. The idea being that your plants grow without being eaten by slugs!

If you have them even after spreading compost, early weeding is worthwhile to keep ground clean until sowing time, and prevent weeds seeding such as bittercress, groundsel, meadow grass and chickweed. I don’t have those weeds here, except the odd one, and one of the best aspects of no dig is how few weeds germinate. Chickweed for example is absent from most undisturbed soil, whereas it proliferates after the passage of a rotovator. The plants below have not had any weeds growing around them, so easy.

Reduce weed growth also with compost mulches, if you have not already. The compost may be your own or green waste or old animal manure or leaf mould or mushroom compost or old woody materials. For composts with weed seeds, be ready with a rake in early spring to knock it around when those seeds are germinating, barely visible in terms of leaves. When you do that on a bright and breezy day, you quickly knock out hundreds of tiny weeds-to-be, saving so much time later on.

New feature! Myth of the month! this old chestnut that won’t go away

I had a mail from Roman Jonczy in the Czech Republic, whose no dig garden features here. Like many of us, he has enjoyed huge and easy success from adding compost as a surface, mulching layer, on weedy ground.

Now he is extending the school garden after spreading 2in/5cm shredded leaves on close-cut grass last autumn. By the way, I am not recommending leaves as a mulch, but he has a forest adjacent so it’s a good use of them. Be creative with your wastes.

Now he wants to mulch over the leaves, read on!

“I was planning to use a 5-6inch layer of compost but the compost company is discouraging me to do so. Their opinion is that compost could only be used “diluted” with soil and they sell a mix of soil/compost in 3:1 ratio for planting. They think that a 6inch layer of just compost would be too “strong” and nothing will grow in it – according to them”.

I assure Roman and any readers that this is untrue. I have sown/planted into composts of all kinds, always with success. Many of us buy compost for propagation!

Don’t be confused by people who do not understand, including and especially even, when they are in positions of authority.

On BBCTV Gardeners World I was filmed filling and planting a new bed, all within 20 minutes. Edward and I made a video of the process and harvests.

I am asked, “when do you mulch winter veg?”. The answer is any time you wish, just dropping forkfuls or shovelfuls of compost around Brussels sprouts, purple sprouting broccoli and kale. On the forum this revealed another myth, that “compost may rot stems”, whereas of course they love it. For leeks you may need to wait until harvesting enough leeks to make some space.

For closely planted salads as above, I prefer to spread compost before the autumn planting, which serves for the summer plantings too.

Whereas undercover we spread compost in May after clearing salads, and before planting summer crops.

It’s always a ONCE A YEAR application. Sorry about the capitals but a lot of people miss that point and think of compost as “fertiliser” (horrible word!) which is “needed to feed plants”. No, compost and all organic matter is food for soil organisms, and also has some nutrients. Feed the soil not the plants, a much simpler method. All soil, even where sowing carrots, and keep your finest compost for those tiny seeds.

My shop, talks and courses

Huge interest in my work, no dig and the new book has fuelled amazing sales of courses, books and our expanding range of products such as the long dibber. No dig carrier bags have just arrived in the shop at £5 each.

I am sorry that many have been unable to come on an early course here, because they sold out so fast. I have had hopeful mails from Spain and many in the UK., hoping for a place.

In winter we can accommodate 12 or 13, just a few more when lunch may be enjoyed outside in warmer weather. I think there are still places on The Guardian day in London this Sunday 18th.

Do check out my “next level” course, for anyone with experience of no dig who wishes to discover  and understand more. And my Diary can help plan your season.

On Friday I give a talk at the lovely Tuppenny Barn near Chichester.  The West Dean talks day on 17th is sold out with 55 coming and a waiting list.

My channel is thriving as gardeners and would-be gardeners share the joys of two things in particular.

For a brief overview, we made an Introductory video. Do have a browse of the 57 videos, there is lots to learn and it’s all based on methods that work, not theories or ideas. Start with onions perhaps, and pea shoots, both in their sowing season.

Asparagus – no dig, planted in mulch over weeds, how to grow and harvest