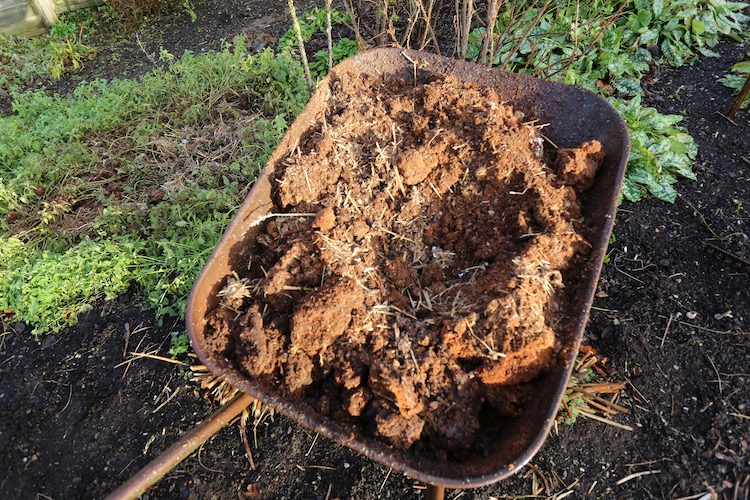 New decade, no dig, no dogma.

If you aren’t yet using the no dig method, now is a fine time to start – cover the weeds, feed the soil.
Then you plant into compost, in early spring.

See my two latest videos, on Planning, and Mini rotation, to gather ideas about keeping your plot full of plantings in 2020.

Whenever beds become vacant, or when there is space to mulch between plants as with the Brussels and kale above, you can cover with an inch/3cm good compost, or a little thicker if lumpy. That is enough for a year of plantings, even of two or three crops.

Any much of organic matter feeds soil organisms, which in turn excrete say wormcasts, which roots can explore for food. Plus the undisturbed, no dig fungal network helps to organise healthy feeding.

I shall explain this at my first talk of the year in Lyme Regis on 15th January – it’s free. See my Events page for the full list of talks and courses. First available course date here is 12th February. Then West Dean 15th and Guardian, London 16th February.

Don’t yet. The saying is, sow in January and you won’t have to eat anything.

However you could source some decent compost, say from Dalefoot (high cost, high value), or sieve some of your compost (takes time). Dalefoot and Bathgate’s Champions Blend are organic approved, to avoid issues of aminopyralid weedkiller.

Buy your seeds, be patient, check out my sowing timeline and Calendar. One possible sowing in house warmth is onions, such as The Kelsae for show.

I have been writing a lot of material for my new online course “Growing Success”, about best skills and methods for growing vegetables easily and quickly. It comprises 53000 words, 880 photos and 25 videos you won’t see elsewhere. Going live soon.

My first online work, the no dig course is selling steadily, and I have updated some of it just recently. It’s totally contemporary, well placed to meet the booming interest in no dig.

We just finished filming a year of planting and cropping in this 25 square metre (270sqft) plot. Photos are all by the double-award winning Jason Ingram, for this garden which is now a monthly Family Garden feature in Which? Gardening magazine. The January issue includes my plan for the whole year and their subscription offer is here.

Edward recently filmed me for a small garden, midwinter video, releasing this weekend on You Tube. I think it’s an epic!

Kevin is the @epicgardening man from San Diego California, who has built a career in gardening social media, and it was a pleasure to meet him. Briefly!

He missed a train at Paddington London, and rocked up at 2.30pm on the shortest afternoon of the year (which happens before the solstice, on 14th December) when if it’s cloudy, the light goes by 3pm.

Yet no sooner had he appeared than a sun appeared from the murk and mist, what do you make of that? He shot a one hour video as we toured the garden and I explained what we were seeing. It was informal, impromptu and I answered his unplanned questions, and the video is proving hugely popular.

Thanks to Katelyn and Simon of @inatinygarden who helped arrange Kevin’s visit and appeared on the day as well. They run a no dig allotment in London, and are beginners.

Check out July-sown radicchios (my You Tube video) if you have not already.

This summer and autumn we made a long video about growing them as a second planting after wild rocket, for the Growing Success course.

My harvest of these radicchios for Christmas salads on 19th December was over 40kg/88lb, a big help to meet the large orders. We picked the polytunnel and greenhouse salad plants tightly, and they have bounced back thanks to picking not cutting, and the mild weather.

Harvests still in the ground

There are still plenty, and pests are eyeing them up. Still not too many pigeons, but I have a net over the Brussels at least. Plants like chervil and Claytonia amaze me, how they grow in the dark and cool.

Martin the potter (here 2 days weekly until Christmas) emptied the bay of 18 month old poo, with bedding of straw and wood shavings. It’s light in colour and smalls sweet, (in my opinion!) – Martin was pleasantly surprised. There were three wheelbarrowfuls, thanks to all you visitors and workers, enough compost for Homeacres front garden.

The main weed will be … tomato seedlings.

16 thoughts on “January 2020 plenty to see, eat and learn, mulch if you have not already”