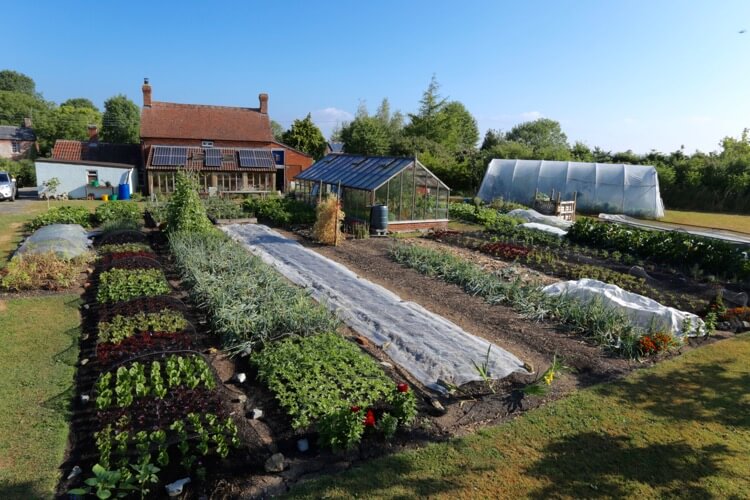 No rain since my last post, just a dusting of 4mm in June so it’s now full-on drought. At least the grass does not need mowing, but we are spending a lot of time with a hose, and I wonder what the water meter will read. It’s either that or no salads, and increasingly other veg need watering too.

However the garden is looking well, helped by plentiful sunshine. A dry summer is better than a wet one, within reason!

There is only so much time and water. Therefore I am estimating which vegetables can bide their time, just surviving until it may rain (my best bet is late August). So far I have not watered celeriac, beetroot except new plantings until established, onions until first water two days ago, climbing beans until first water four days ago, courgettes, raspberries, asparagus and most squash.

The photos say it. Homeacres soil is silt, dense enough to crack open when unmulched.

Change of mulch for drought

Normally I mulch only with compost, for fear of slugs, also to help soil warm up.

This summer I have kept some crop residues as mulch for new plantings, for example after we mowed the bed of pea shoots, we then planted salads through some (not all) of the haulm. Also I am trialling “digestate” residue from methane production, it’s a ‘vegan’ one of grass and maize called Bloomin’ Amazing, though it’s not organic.

And I have been using mesh to cool plants – it’s cooler than fleece.

I posted a new video in this series this morning, showing failures as well as successes, I hope you enjoy it. The next video will be on #nodig potatoes, from sowing to pulling.

This garden receives three to five minutes of water every day, by hose from the mains supply.

On 12th July we harvested Charlotte and Gourmande, they were going pale and had grown well, plus I wanted to plant leeks in that space. You can see the harvest on my next video: each plant gave 1.8kg/4lb potatoes, and it’s the 4th year consecutive of potatoes in this area.

Another plant that is enjoying the sunshine, providing one can water. Although the small garden tomatoes have not received much water until recently.

For cucumbers undercover, grown as cordons around strings, I cut off lower leaves as with tomatoes. AT the top they are now looped over the wire, along a little and coming down.

A mystery for me, the first time I tried them. Until a week ago we had given them no water, but now there are some pods swelling. They are so much slower than French beans.

So much still to sow and plant, I so hope my weather forecast is wrong and that we have some rain. Otherwise, more watering.

We have alsomt no annual weeds thanks to no dig, and the dry weather. However wherever there are roots of bindweed, its growth is phenomenal and needs regular removal. The photo is not for weeding though, lesser/field bindweed in grass near to my beds.

My most valuable crop, so I look after them. These were sown 4th June.

These two photos show the growth in 7 days, also you can see how the potato bed in middle is now leeks. The climbing beans have barely grown however, hence my decision to water them.

I hope you enjoy these images and have found the blog helpful.