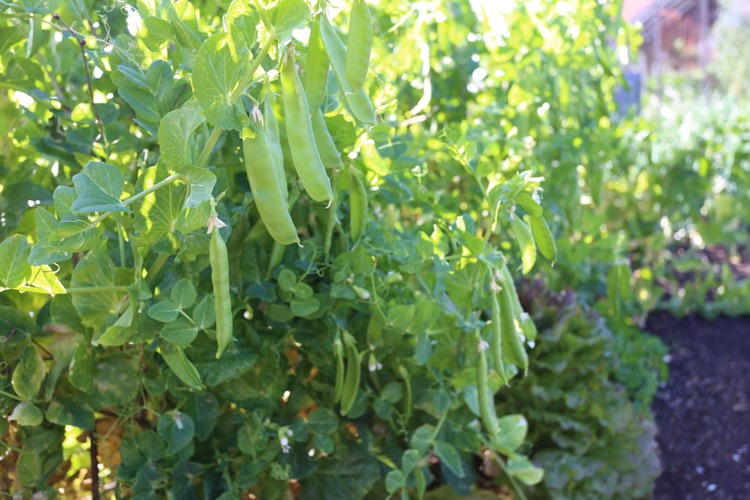 Be prepared for everything: picking planting sowing weeding watering pests heat. Give as much time as you can now, for best results later.

June here was much less hot than across the Channel. Our average temperature was 15C/59F, with 75mm rain and only 145hrs sunshine.

However most of the rain fell before mid month and since mid June there has been a measly 6mm, so soil is dry again and watering will be a theme again this July. Be thorough and less frequent, see my watering video for tips.

I was just in Sweden at Ridgedale Farm, an excellent place for learning to farm. See this video for my chat with Richard Perkins about no dig, compost, farm size and watering.

First early varieties are now cropping and soon it’s time to harvest second earlies. On the day of harvest, level the surface and you can then transplant kale, leeks, cauliflower and beetroot. Check my Sowing timeline for other ideas.

The first row of Casablanca in my dig/no dig beds gave 7.72kg/17lb from the dig bed and 8.47kg/19lb from the no dig bed, four plants across the 1.5m/5ft width of each bed. Lovely potatoes on both beds and super tasty.

I have had happy feedback about no dig potatoes from all over the world including N Carolina and California.

Sow beetroot, broccoli and carrots asap, kale, many salads including chicory and endive. Coriander and chervil at month’s end.

I like to clear beds as soon as a final harvest is taken, so that the old plants are not pumping moisture from the soil. In the case of these Greyhound cabbage, I have been waiting and waiting for them to heart, but they hardly did, and a whole month later than normal. I think it’s faulty seed maintenance, they are from Mr Fothergills and I shall ask them about it.

By comparison the Marathon calabrese beyond were sown and planted at the same time as these cabbage, and gave lovely heads in early June.

The Oregon Sugar Pod peas are home saved seed and growing nicely, do leave some peas unpicked so they ripen to dry on the plant, then pick for seed.

Clearing and preparing is super easy with no dig, just cut off existing plants at soil level with roots left in the soil. Then pop in new seeds and plants. Pest protection needs considering.

There is no need to spray until perhaps this week, the first week of July, when you see the first significant numbers of white butterflies. We are now finding a few caterpillars in heads of broccoli.

For new transplants I advise you cover with mesh at planting time, because as well as excluding butterflies, this keeps out other insects which cause damage in early summer, such as gall midge. Use enviromesh or equivalent

Best keep the mesh on for 6-8 weeks and there is no need to spray Bt when mesh is over the plants.

After removing mesh in say mid to late August, spray Bt on all leaves, every 18-20 days until about early October. It degrades with sunlight I believe.

Do keep paths weed free. If they are already clean and mulched, just keep pulling any small weeds. Otherwise some cardboard with a thin layer of old wood or rough compost is worthwhile.

Weed free paths in summer catch any rain and then plants in the beds’ outer rows can root into the mulched paths to use the water before it evaporates. Last summer we noticed how the veg closest to paths was the biggest.

Many people use this as a source of knowledge, because there is a Search bar.

However my web host suggested we close it down because of the difficulty of protection from spam.

To help keep it going, please post or reply to posts. Only problem is the difficulty of logging in and a complicated Captcha!  Plus you need a different password to the main website.

I had this detailed comment on You Tube 15th June from Michael Brotherton, a retired engineer who is enjoying no dig:

I have been promoting the use of compost which I am told is too expensive.  Even my good wife this year commented when I laid £14.99 worth of compost on my Broad Bean/Celeriac bed that she would not be purchasing £15,00 pounds worth of beans if I were not growing them.  Ah I says, but the compost will last for two years maybe longer and I have just also planted 108 leeks which you pointed out were selling at Tesco at 50p each (54.00 saved).

I have also purchased £40.00 of mushroom compost not sure of quantity.  Total £100.00 on the compost.  Is that excessive? It is cheaper than employing someone to dig it.   Not many of my fellow plot holders have compost bins most have a single Dalek. I can’t make enough compost though should be OK with four bins but the compost does not come all at once when I need it.  Started to fill one bin up to the top solve this. I don’t dig because I am becoming too old for the physical effort.  Not digging puts me ahead of the growing season.  My output is increasing each season.

Aphids: blackfly on beans reduced by no dig

A fourth year no dig for me and plants are absolutely flying. Most interesting point is that of the 20 or so plots growing broad beans (Aquadulce) on the allotments, mine are the only ones without blackfly and are also the tallest at nearly 5ft. Incredible tasting beans too.

Clubroot reduced by no dig

I inherited club root on my plot and used to use lime to keep it in check. It still had an impact on brassicas though, especially my calabrese.

This year with no dig and no lime, there was a little club root but it was much less pronounced and my plants were super healthy.

For aphids generally, my response is extra water and to spray water on aphid covered leaves.

My video shows how it looked about  month ago, since then growth was steady but slow, until the 25-30C heat in late June.

For cordon (not ridge) cucumbers I remove every second fruit, so that plants are not drained by producing gluts, followed by the main stem empty for a while. Cucumbers grow so fast and partly it depends on the fruit quality you desire: I grow the long ones and each of those contains much water and food, plus they are sweet.

Many developments on this, not least with one company on particular. I keep receiving comments about damage, such as this on You Tube, by email after I asked him who supplied the manure causing problems:

Regarding the contaminated horse manure that I commented on under the youtube video – it was produced by Harrington and Jessup. I’ve used it for a few years, and this is the first time I’ve had a problem with it, but as I say, two beds are next to each other, both with broad beans, and the bed with their bag of compost is wilted as you describe, the other is fine and productive.

It’s interesting that Harrington and Jessup have been aware of the dangers of aminopyralid since 2008. It is their compost on the rhubarb below right.

I had one batch of compost with some pyralid contaminated horse manure, and we spread it on grass and weeds to heal. Photos below are plants growing in that compost on 30th June, to give you an idea of the symptoms. Most damage is to new growth with inward curling leaves.