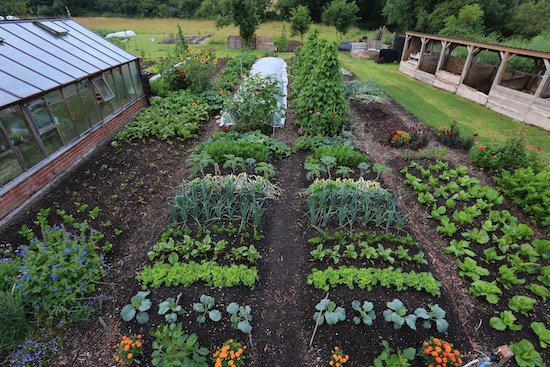 Everything happens in July! No dig makes it all easier and quicker.

You can replant a lot of your garden, after harvests of early plantings. Clear beds to replant as soon as you can, because every day now is worth a week of growth in October. We are still transplanting leeks and broccoli to overwinter, but it’s too late to sow them.

This was at Hampton Court Palace in London, between the 5th to 11th July. The RHS had asked if we would consider designing and building a no dig garden, two years ago. I was with Steph at the time, and she was particularly keen, having created gardens at Shows before.

Then Covid intervened and it was only this July that the garden finally happened. Then the builder dropped out in April and for a while it looked perilous! Then two brilliant guys appeared, Terry Porter who raised the plants, and Jon Wheatley who organised much of the garden creation, with the guiding hand of Steph who was there for the two week build.

The result was incredible and thousands of people admired the garden, and were introduced to no dig. Steph and her team did a fantastic job of keeping the garden in tip top condition. We are hugely grateful to First Polytunnels, and many other contributors including Dalefoot Compost. The RHS were thrilled, and so are we, that no dig and vegetable growing were such an important part of their show.

By early August you can sow oriental vegetables and salad rocket, for high quality leaves in autumn. They will crop for longer and with fewer pests, compared to sowings in July. And it will be time to sow true spinach (different to leaf beet), for cropping from late September to may.

Last autumn I sowed salad rocket on 4th October, and we harvested leaves mainly in early spring, then I left it to flower. The flowers are white, compared to yellow flowers on wild rocket. By mid July, seedpods were drying and I managed to gather most of them before they opened, with plenty of dry seed.

Summer warmth makes bindweed/convolvulus grow faster. If its root system is well developed, the power of new growth is amazing. Either you spend a lot of time pulling it, from paths as well as beds, or you needed to lay a cover before summer.

In my new area, we have used both methods. Black polythene has saved much time and plants grow well through it. Where we remove bindweed, often with a trowel to extract some of the surface root at least, that all goes on the compost heaps. It decomposes within a few weeks, even in heaps which are not hot.

Back in early spring, I had not planned to use polythene covers. Then during April, the growth of new bindweed persuaded me to ask my son Jack if he had any spare covers, from heaps of silage, which is grass conserved by anaerobic fermentation under plastic.

We covered one area for potatoes, and one for winter squash. Vegetable growth has been excellent, but we have needed to keep pulling bindweed from the planting holes.

The potatoes are second early types, which come ready to harvest from about the middle of July. I have been very impressed with the resultss, from using 7-8 cm/3 inches of mushroom plus green waste compost on top of some very vigorous weeds, starting in late February. See previous posts and videos for details.

There is still plenty of time left for more growth. Ideally you will have transplants ready, as with the leeks below, sown in April.

Normally I do not reckon to spread any more compost in the summer, before second plantings. I did here because the initial compost application was quite light, and also I had a heap more or less ready, even though the compost is less than three months old. I am curious to see how many weed seeds there may be, since the compost did not get hot in the plastic bin.

On the large areas we have covered with plastic the ground is level and there are no beds yet. You can also create new beds by placing wooden planks as temporary borders or sides. Then what compost to fill them with?

We did a trial with one third of 4 x 8’/1.2 x 2.4 m. In one end the compost is woodchip, sieved quite small so it looks like compost you might buy in a sack. In the other end is home-made, eight month old compost, more lumpy. In late April both beds were sown and planted to the same vegetables.

We shall make a video about the resulting growth, the photos give an idea! I feel that some peat-free compost has a nutrient status similar to what I am finding in the sieved woodchip.

After six lovely years without any, I am suffering red spider mite on aubergines, cucumber, melon and my only loofah plant, all in the greenhouse. So far there are no red spiders in the poly tunnel. I have had to remove many plants already, it’s a miserable list. One can buy predators in May, at no little expense.

Aphids were bad this spring, before predators arrived. Things are now more balanced, but I lost some celeriac in May and June, which just declined to grow because of the damage to new leaves. Some of the same plants which I had kept under cover in the new area, have grown well. It’s ironic because the cover was against rabbits!

Thank you to all of you who send photos of your no dig Gardens and it’s really inspiring to see them. Below is a sequence, whose first photo I featured in March. It’s a garden in Friesland made by Gerrit and Metsje.

I shall be hosting two time slots, 9.30am to midday and 1.30pm to 4pm. The whole of Homeacres garden and market garden will be open for browsing around. We will label the different beds, trial beds and compost heaps and you can see our progress on the new piece of land.  You can buy your tickets here. With the proceeds we are supporting two charities, Send a Cow and PROMISEworks.

We are thrilled at how well this has grown. In June it was a pleasure to welcome Jekka McVicar here, and to make the video about this garden and herbs in general. She is such a fount of knowledge, and has been growing organically for 40 years.

Next July she will again stage a festival, at her nursery near Bristol. It’s well worth a visit, we enjoyed it very much.