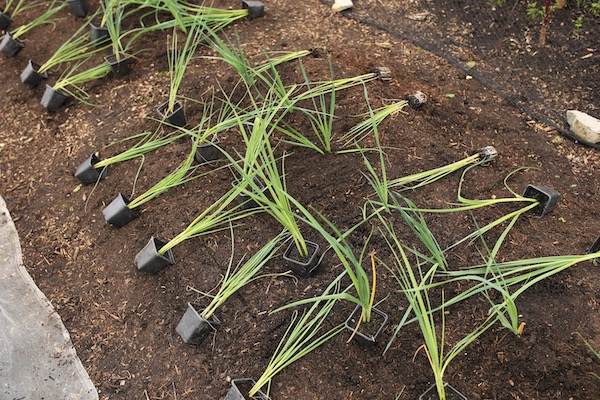 It’s speeding up now, but growth has been slowed by the weather here. A cool two weeks until 10th July saw daytime maxima always under 20C 68F and averaging 18.5C 65F, with just 4.5 hours sunshine per day and 35mm rain in the two weeks. Not much heavy rain, but grey and damp.

Good weather for succession planting! Almost every day I make new sowings in the greenhouse and we transplant a second crop outside. See the Sowing Timeline, my Calendar if you have one (new edition September), and online Course 2 for details and descriptions. Be wary of sowing dates advised on seed packets, see below!

They are greedy plants, and fast growers in midsummer. You can cut and move the stems of squash and pumpkin plants as much as you like: they just want to grow and are opportunists.

Letting them ramble on bare soil will increase yield, as they can then root into new ground. Vertical growing is possible if not too windy. However they can’t then make new roots.

No wonder there is confusion. I bought some seed packets from Plants of Distinction (UK), and was amazed to see the recommended dates for sowing, on their seed packets.

Look what they suggest, compared to my best dates in brackets.

Lambs lettuce February to July – (February and August to September)

Mustard March to July – (February to March and August)

Lettuce February to May – (February to August, September for undercover in winter)

Salad rocket February to May – (February and August)

I had this question: I’m about to start 2 x compost bins. You suggest 50:50 green to brown manure. A number of other articles I’ve read are saying 25-30 parts carbon (brown) to 1 part green (nitrogen). How come the difference? – from Craig near Sydney

I notice how proportions are indeed quoted as carbon to nitrogen. Which is difficult for most of us as we don’t know how much of either is in different materials.

I find it simpler to work by green and brown. Half and half green and brown is a rule of thumb, but no more than an estimate. This measure is more by weight than volume, and I guesstimate it. In summer the mix has more green, in winter more brown. That means decomposition takes  longer in winter, when there is less heat-producing green. See my website page for details including what is green and what is brown, and I give more details in lesson 13 of online Course 1.

Onions, ready or not?

Growth and health is good here this year. I tried a closer spacing of the multisown clumps. One risk is mildew in wet weather, and it has been damp, but not relentlessly wet. Another risk is small onions, but spring warmth and soil fertility sorted that one.

I have reports of leaf miner, endemic in some regions, and white rot from sets. Sorry no time here to look further into that. An indication of ripeness is when about half of the stems have folded flat on the ground. Either pull and fold the rest (makes thinner necks) or fold the rest and pull 10 days later.

My wonderful Rose de Roscoff harvest grew from seed fiven by Max Epstein of Krautgaart no dig market garden in Luxembourg. It’s a wonderful place if ever you have the chance to visit, @krautgaart on IG.

Potatoes, ready or not?

A key indicator for me is leaves losing lustre, turning paler, with stems falling down more too. Flowering will have been 2-4 weeks earlier. Second earlies come ready from now, see my recent video. It was the Three Strip Trial and lowest yield was from the forked bed.

This was the sixth consecutive year of Charlotte in the same beds. Even there was blackleg last year on one plant.

If you notice the brown, translucent leaves of late blight, cut stems off, and compost the blighted material. Then harvest as soon as there is a dry afternoon.

Use my timings to transplant whatever you want to eat, there are still many choices. For direct sowing, the options are fewer.

Some of my favourites are blooming now – zinnia, salvia patens, echinacea, snapdragon and French marigolds. I like to dot them around the garden, which attracts insects and looks gorgeous.

July is crucial – keep at it this month. Pop in new plants as quickly as possible after ground comes clear from a final harvest. July’s warmth and light means it’s the most growing month, unless your climate is super hot.

Second cropping options are also to intersow and inter plant, and also to plant very close to vegetables whose final harvest is coming soon. See the result with leeks and celeriac. Same beds, photos are from the other end.

I am so upset to hear of increasing problems from this. It’s getting even more serious.

The main identification is a deformation of plants’ growing tips. And crinkling/yellowing/distortion of older leaves. Labs often cannot measure the tiny amounts of this lethal poison, which are enough to damage our vegetable and fruit plants. Roses and apple trees suffer too.

Curling lower leaves is not a symptom of itself – on tomatoes that can be leaf roll and even old age.

If you suffer the misery, email [email protected].

Path space is growing space. Paths need to be weed free when your beds have no wooden sides. Vegetables can root into paths and weeds cannot root in.

I had a question from Hannah, who laid first cardboard over vigorous weeds two months earlier:

The pathways are still currently just cardboard. Which due to rain the cardboard had raised and changed shape slightly, but we are putting bricks and other items to try and keep it down. We have topped up the cardboard in the pathways. How long do we need to leave it to add the woodchip? Or can this be done straight away?

The answer is conditioned by weather. Moist conditions make cardboard soft and curling, and I would add the wood now. If dry, you may not need to and then it’s easier to lay more on top after 8-10 weeks, if perennial weeds are still alive and growing through. With a little wood mulch applied then.

My online Course one will appear in French on 1st September. Same price as in English, more details to follow. Alex the translator has been highlighting the differences in language, for example with this question about garlic:

– white: to plant in autumn, for colder climates

– violet: to plant in autumn, early and for warm areas

– pink: to plant in the spring, late cropping

The equivalence categories in English are:

Softneck is white and violet.

Vive la difference 😀 but not too much!