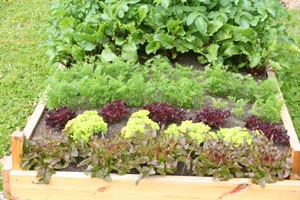 The arrival of summer heat in May’s last week has capped a bountiful spring here, with plenty of good growing weather: gently rising temperatures, sufficient moisture but no excess, and only mild late frosts which caused no major damage.

Many people have asked, through the middle of May, why their summer (mainly runner) beans have grown slowly and were quite yellow. The simple answer is that they were planted too early and found themselves in soil that was too cold to provide them with enough food for growth. Until the soil warms up to 20C or more, frequently, there is insufficient microbial activity for the release of nutrients they need: the same applies to sweetcorn, and many cucurbits, less so to tomatoes. The nutrients are there, just unavailable for climatic reasons.

Anyway there should be less of that in June and we may instead be more concerned about conserving moisture. If your plants are growing in full bodied, undug and mulched soil, things should go well. Mulching can be with compost – the easiest to mulch manage with less chance for slugs to hide, also the most attractive – or of mowings, paper, cardboard and so forth.

Mulching an already dry soil is better than leaving it unprotected, but not too thickly or rain may be unable to penetrate. Some of the best and simplest mulching is achieved by the growing leaves of vegetables: in my garden in late May, calabrese, broad beans and peas are offering complete soil protection while carrots and parsnips will soon be covering the space between their rows (see photos). Squashes and courgettes are just about to explode into growth.By contrast, any new plantings will benefit from watering in, but not excessively. Once they are established, water is generally best withheld until crops are more mature, for example at the flowering stage of beans, peas and courgettes.

June is a good month for planting brussels sprouts and leeks, hopefully you sowed them earlier, otherwise buy plants. There are many possible sowings to make now including kale of all types, purple sprouting, swede, carrots for autumn harvest and winter storage, and lettuce for summer pickings. By the end of June, shortening days (oh dear!) make it desirable to sow bulb fennel, endives, chicories and a few oriental leaves.

Do keep hoeing any bare soil even if weed seedlings are small – don’t rest on your laurels: at this time of year there is ALWAYS something that needs attention, just keep looking to see what it is. Kipling understood this:

“Our England is a garden, and such gardens are not made By singing ‘Oh how wonderful’ and sitting in the shade”