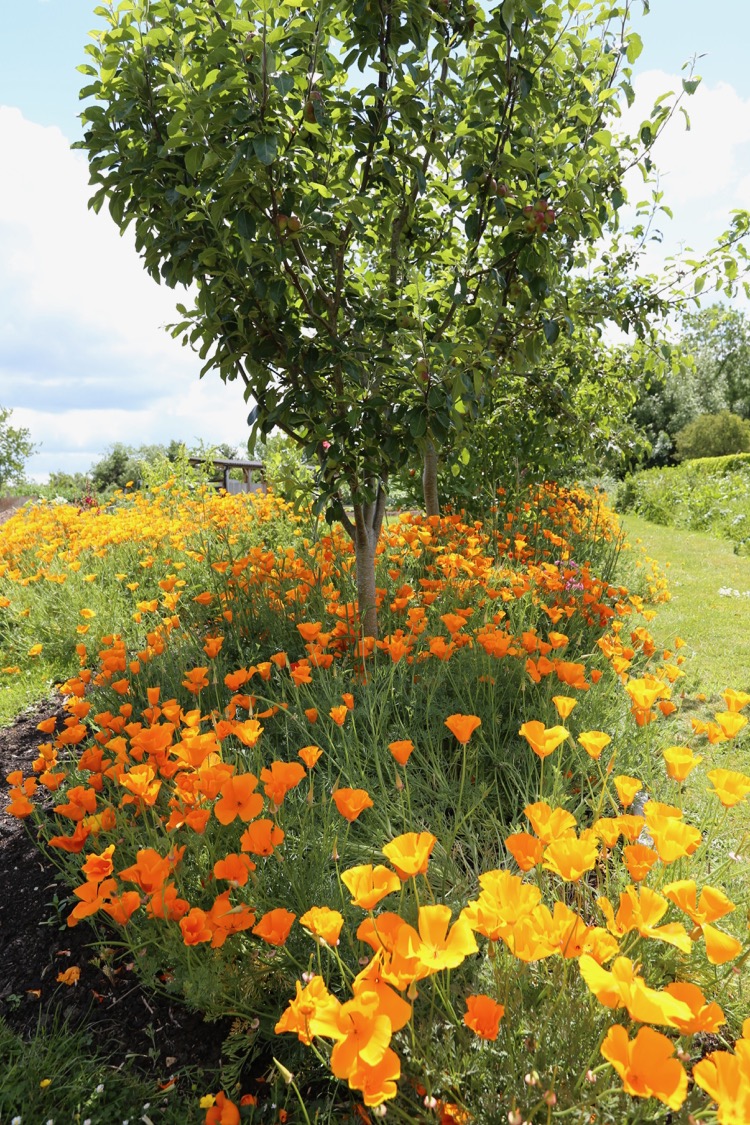 Is cool and damp better than hot and dry? Last year we were short of moisture, this year we are deprived of warmth and light. I preferred last year! Mostly you can add water, but can’t add warmth. The first two weeks of June saw 69mm/2.8in rain here, and afternoon temperatures of only 17C/63F: sunshine was 48 hours, similar to February.

No dig helps in all weathers, with soil holding moisture, and warmth too. Especially when mulches are dark compost on top, which warms readily in any sunshine, say where beds have new plantings.

I posted a video about no dig requiring less compost than when ground is disturbed. In my trial beds this year, it’s only potatoes which are cropping (slightly) more on the dig bed.

June offers many harvests, and many opportunities to start new vegetables, for autumn and spring harvests – Purple Sprouting broccoli grows nicely here from sowing in mid June. It’s one of the few vegetables where I find F1 varieties make a worthwhile difference, and I grow Claret, for harvests mainly in April to early May.

I sowed lettuce for the second time this year in late May to early June, for planting late June then to start cropping when the first planting rises to flower.

We are planting leeks over the next month, for example after kohlrabi and potatoes. Kale and cabbage plants go in soon after say broad beans, and swedes go in at month’s end after spring onions.If the plants are ready before a first crop finishes, we either pot them on, or make a gap between the existing crop to pop in plants – as with Brussels sprouts between carrots.

Often I have cucumbers by mid June, but not this year, another two weeks I think. Sungold tomatoes will not be ready until July, but we are picking some lovely basil shoots.

The March plantings of calabrese have cropped well and are giving side shoots for a while, until I need space for beetroot. Cabbice cabbage from Delfland Nurseries (excellent place to buy great organic plants) are almost ready and make large flat hearts.

Broad beans are peaking and will finish in two weeks, while peas continue cropping until early July. Cascade is giving sugar snap peas now, then Alderman come ready, and a later sowing or Oregon Sugar Pod is starting to flower now.

Heaps fill fast here in summer: six weeks on average to make an (eventual) tonne of compost, in heaps 1.5m/5ft square. I am adding both soil and old wood chip as brown, to balance all the green we now have. Main additions now are:

This video is from Robi and Tjasa Spiler who attended the compost making course on 1st June.

An unnatural chemical which is far more prevalent than I had realised. For example this blog from Skerries near Dublin in Ireland where the poison is in cow manure, from a farmer who probably is not realising anything about the grief his manure is now causing.

It has been reported in some compost from J Arther Bower, Westlands New Horizon and Godwins. The problem is, it won’t be in all sacks, but you don’t know when you buy them. The pea or bean sowing test is worthwhile, but not a huge help if you already have bought the compost.

The NFU have warned famers about pyralid contamination, see this page. Turns out it was used in 2018 on some fields of rape, in a product called Astrokerb, made by Dow. In the FB group Undug, a farmworker who had been using weedkillers with aminopyralid reported how they gave him flu-like symptoms every time he opened a can to put in the sprayer. He had to find other work.

A serial offender in up to now this year is “Country Natural organic manure”. They were named as causing problems in 2008 in this RHS thread, and again many times recently, plus they have been extremely rude to people telling them of growth problems from their product, and have taken down their Facebook page!

I am in conversation about this with the RHS, who are not doing anything yet, and with Viridor who make green waste compost near here. They are keenly aware of the dangers and are proposing extra tests on each batch of compost.

If you suffer damage, do post it on social media as there will only be action if enough evidence is out there.

I am looking to source more wood chips for composting. While being careful not to use undecomposed wood as mulch for beds – and I use only a thin layer on the paths, maximum 203cm / 1 inch.

Feedback is heartwarming from all over the world. I received this message from North California one mile inland:

“From your videos I attempted my first No Dig garden at the end of 2018. Even through Winter storms it started producing, and by the time Spring arrived, I had an abundant, healthy, thriving garden, with my nearest neighbors taking notice, and swearing they must take up the method themselves.”

I gave two talks in Ireland, one in Bristol and am back there on Sunday at the Colston Hall.

Steph’s talks at Gardeners World Live in Birmingham were a huge success, the room packed out every time, so much interest. Afterwards the Allotment Association reported many new members!

June is such a lovely month for ornamental plants.

This year’s star has been Escholzia/Californian poppies, whose colours are especially intense in 2019, and particularly when the flowers fold inwards.

There won’t I think be the amazing harvests here of last year, since temperatures are so much lower. Nonetheless it’s heartening to see summer plantings growing nicely, and we have plenty of basil for salad bags. In the greenhouse at 9pm yesterday 14th June, the temperature was 16C/61F, compared to 11C/52F in the polytunnel.

Watch out for my new video about polytunnels.

An amazing and huge new garden resort has opened near here, on the site of Hadspen gardens. It’s called The Newt, see this review in the Telegraph newspaper.

We were invited to an open day and I took the two photos below, in early May. There is work continuing to complete a garden museum and a Roman villa.