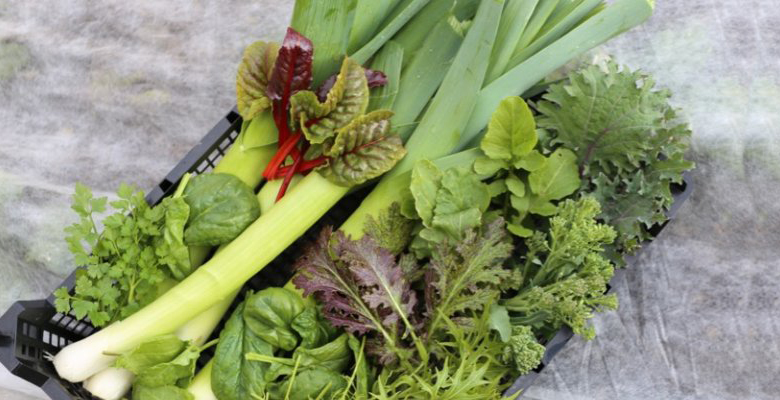 Cold conditions in Europe mean a slow start to spring: it’s -7C/19F with windchill, as I write this. On the other hand there is more time to mulch and feed soil, if you have not already. Early sowings of frost hardy vegetables are fine undercover, overwintered salads and many veg are surviving outside. I am sowing tomatoes around 20th March.

We sowed thousands of seeds on 20th February, a day after assembling the hotbed, and some are emerging such as lettuce, cabbage and radish. We have sown only vegetables that are frost hardy, because after 2 weeks or so on the hotbed, they move to a bench in the unheated greenhouse, where it’s icy by night in this weather.

Likewise after they are planted outside in 4-5 weeks, the fleece covers give protection from wind, but do not protect from frost by night.

You can still sow all these seeds (onion, spinach, lettuce, coriander, calabrese etc) now and into March. now, late February is auspicious by the moon with full waxing energy.

I was asked this question: “Do your sowing containers have drainage holes?” and yes they do! as large as possible. Seedling failures are more common from compost being too soggy than from dryness. Water your trays thoroughly but not every day at this time of year, until the plants are larger, and it’s sunny weather, and you probably do need to water every day if you are using electric heat mats, which cause dryness underneath where you don’t see it.

Gardeners in the USA and Canada may smile at how we are suffering sub-zero (C not F) temperatures, because it’s not that cold compared to what they endure. However the difficulty is that our coldest weather of the whole winter is happening in early spring!

Some vegetables are fine with it – Brussels sprouts, curly kale, Claytonia salad, broad beans, leeks and parsnips. But for new sowings it’s more difficult, even in a greenhouse where it’s icy inside by night. If you are following my sowing timeline, this year it makes sense to wait 2 weeks before sowing in southern UK and up to 4 weeks in northern UK. Potato seed for example is better chitting (sprouting slowly) on a windowsill than planted in cold soil: I expect to plant first earlies at the end of March this year, not mid March.

See also the comment on propagation if you have no undercover space, at the end of this blog.

A comment on this thread from Allan Took in the Peak District:

I converted to no dig last year and for the first time in 40 years of growing veg I never had the hoe out and the plot is 25×12 yards.

I knew the standard system I was following was failing year on year. When I discovered your methods on social media last year I knew it must be the answer. I converted the whole plot last February with 5 tons of composted manure and had the best year ever.

And I received this mail from Monica Wagtendonk

Years ago we had a vegetable garden but we stopped because of all the digging and the weeds.

I just love to hear how no dig allows people who would or could not otherwise be gardening, or are losing enthusiasm, to succeed and enjoy it again.

Seasonal and other videos

Many of the new How to Grow series of videos are in season now, such as spinach, beetroot, onions and early calabrese + cabbage.

My You Tube channel is attracting a lot of interest, and the Fourth Summer video of July 2016 continues to gain 2,000 views every day, is at over 900,000 views. We shall celebrate the million when it happens. Channel subscribers are 43% N America (including Canada), 22% UK, and 19,000 spread around the world.

An experiment for early pea shoots

I have experimented with overwintering pea plants, variety Alderman, for early pea shoots. All were sown in the greenhouse, 3 seeds per module, and planted a month later, from sowings in October, December and January.

They have been under protection of a mesh cover, partly against rabbits who love pea shoots! The October sown plants are certainly larger and we could pick a few shoots now, but because of the cold & non-growing conditions, I am leaving them for now. In fact their stems are turning brown, and It’s too early to say if such an early sowing is viable.

Another trial on this bed is of Thermacrop which I have purchased as a fleece-alternative, because it’s suddenly difficult to buy 25gsm fleece. The nearest equivalent is 30gsm and I use that, but I think the Thermacrop may be as effective and also should last for more years’ use, because it’s more the texture of mesh, yet softer.

See also this page for information on multi-sowing.

I have fond memories of my first ever bed in February 1981, based on a German booklet I had come across. I dug out the soil, laid woody bits (twigs not logs!), then leaves, grass, then compost and finally the soil back over. It worked well and I had carrots by May. The fine woody bits decompose during a couple of years to maintain fertility.

Yesterday on the spur of the moment, I decided to create another, but a no dig mound. It’s absolutely not a “hugel” in the modern sense of a word that I feel has been changed in meaning by Sepp Holzer’s use of logs as base layer, and usually soil is dug out of big holes to place them in. Holzer happened to have spare tree trunks!

Josh and I went foraging in the nearby wood for some old twigs and small branches, then some finer twigs to place on them, then some old (half decomposed) grass & moss, then some soil/compost from a waste heap where a neighbour had thrown her grass and weeds over the fence, then some old cow manure, homemade compost, green waste compost and mushroom compost.

In volume terms, the soil and compost is around 80%.

The harvests that one puts by in summer and autumn are coming into their own now. My root vegetables are either in sacks or crates in the brick lean-to (house annexe) which has an earth and brick floor: it’s not frosty and mostly damp + cool.

Vegetables such as onions, garlic and squash store best in dry air, so in the house is fine. I have not seen mould on any squash yet and they should stay usable until late April, unless we eat them before. A few onions are sprouting and they are nice as spring onions. My Diary includes information on storing vegetables at different times of year.

We are loving the response to courses here and to lectures around the country. Due to the strong demand, I have posted a new course date of April 4th. At all my events I value the chance to meet gardeners and discuss their successes, problems and what advice they most value. My sowing timeline is much used and I was impressed to see how the Butlins from Birmingham had printed and laminated it, for reference in their allotment shed.

Later in April I am doing an East Midlands mini-tour with a talk in Southwell, Notts on 25th April, then a talk in Sheffield on 26th as part of the city’s debate week, details still tbc. On 27th I am giving a day course at the Steiner school in Kings Langley, Herts, more details to follow.

A comment on propagation from the forum, by pmshrink (Penny)

I haven’t started sowing as it’s such cold weather. Waiting a little while I find better as things catch up with the warmer lighter days. When I sow I sow on my allotment in covered seed trays with fleece over the top. This seems to prevent legginess. The seedlings get maximum light being outdoors and the plastic cover and fleece are enough to keep the cold off.  In a normal February I would be just starting now but it’s about to get even colder so I’m going to wait a couple of weeks.

I also sow in the autumn in boxes, with fleece or double fleece over the top.  I have overwintered lettuces now which are about 5” tall and should grow well when I plant them out under a mini tunnel in a couple of weeks. They have survived winter ok – despite the boxes being blown off the table in a gale and having to be replanted!

For tomatoes I germinate them indoors then treat them as above. Courgettes squash and runner beans outside as above but much later.

I never get legginess problems with this method- which came about as I have nowhere suitable at home.