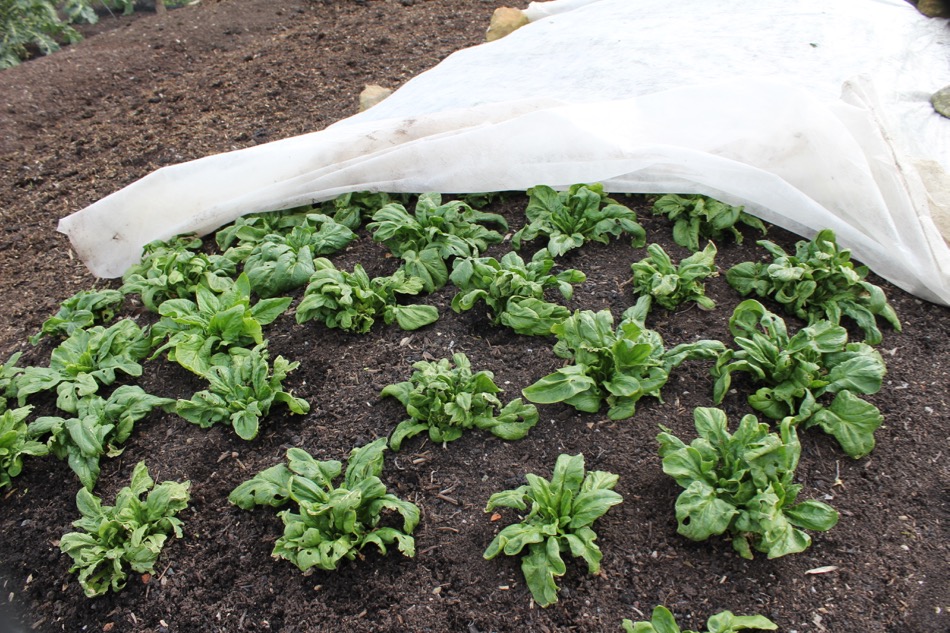 For March there is a big change to the weather pattern with more winds from north and east, cold showers and frequent frosts. There is no rush to sow, particularly outside, and see the tips below on using fleece, a great help to plants in cold springs.
February temperatures were a little above average but its ten frosts, mostly in the second half, made it the coolest month of winter here, also the sunniest.

Artificial warmth is expensive and precious. The most effective time to provide it is when seeds are germinating, for two reasons:

At Homeacres I use a hotbed of fresh horse manure, currently its 47C 117F, one foot below the surface and two weeks after being assembled. Already it has sunk a lot and soon I shall take plants and pallet off temporarily, in order to add more fresh manure and maintain the heat.
In smaller gardens, electric propagators or windowsills are good for getting seedlings underway.

If you have no way of warming seeds, seeds still germinate but more slowly and sometimes unevenly. Undercover without heat its fine to germinate lettuce, brassicas, peas, broad beans, onions, spinach.

My tomato seeds are hitting the compost some time in the next three weeks. Moon-wise there are fruit days on 3rd, 4th, 12th, 20th and 21st. The last two days are just before full moon, when strong waxing forces can encourage stronger growth in sowings made then.

Undercover in early March its good to sow Boltardy beetroot, peas for both shoots and (in milder areas) pods, onions of all kinds though not leeks yet (risk of bolting of sown too early), lettuce, spinach, summer brassicas (not Brussels etc), radish, dill, coriander – and not basil which craves more warmth and light, is best sown in April undercover.

In a polytunnel its good to sow carrots now, if you haven’t already.

See video https://www.youtube.com/watch?v=jSKHHPHlfzk about sowing and pricking into modules.

Sowings in early March, outside

In view of the cold weather its mostly better to wait until mid March. Broad beans are the main sowing now, you can dib individual holes about 2in (5cm) deep. If your plot has mice eating their seed, and possibly peas too, I would sow seeds undercover in modules to have plants in 3-4 weeks, preferably in cells of around 3in (7cm) depth.

You can sow parsnips outside any time from now. I find that mid March is good and draw drills in the surface compost, whether it is homemade, green waste, old animal manure or whatever. See video of outside sowing into surface compost https://www.youtube.com/watch?v=qZs17nwxgtg

Growth differences undercover and in the open

In spring you obtain huge benefits by protecting plants from wind, because the sun is becoming so rapidly stronger, while temperatures are often low. Even if nights are frosty, daytime growth undercover can be strong, especially of cool-tolerant vegetables such as lettuce, brassicas, carrots etc.

Covers range from fleece to cloches to polytunnels and greenhouses.

Simply lay fleece over and on top of any plants you wish to bring on. For example I have covered existing beds of sorrel, spinach and spring cabbage, also a new planting of peas for shoots. Incidentally pea plants are hardy and survive frost, but the fleece encourages new growth.

Fleece is so light that plants can push it up. Having it close to their leaves means the warmth is kept where its useful. Fleece keeps out about 30% of light but at this time that does not matter because there is more light than warmth. Also it lets enough rain and air through that neither watering or ventilation are necessary, unlike with cloches.

The tricky bit is how to remove them or stop green manures growing. The mustard I grow (Sinapsis alba) is “agricultural mustard” and is killed by frosts of around -5C (23F) or lower, so finally its dying off. All that is left is a straw-like residue of the stems, which you can rake off to compost and then spread compost if you wish, or sow/plant in the clean soil.

There are no weeds growing on there, I pulled a few little ones in the autumn, the surface is beautifully clean and in this case will be waiting for squash plants in late May, the fourth year in a row in those beds, one of my experiments.

I was privileged at the London Garden Press Event (Barbican Centre, February 18th) to share tea with Peter Seabrook and Chris Baines. Peter, in his 80th year, is organising a Chelsea garden with 80 suppliers of plants, and he was so animated when discussing all his plans for it. And he is still gardening editor for the Sun. And he still likes digging! we have had a few good discussions about that.

Chris is a wildlife veteran, he was advocating gardens for wildlife years, even decades before anyone else. He was telling us about working at the BBC where he was an early presenter of Countryfile in 1988 which evolved from his television programmes “Your country needs you”.

He recounted how he left that  job when the producer decided that better, more objective questions would be asked by younger, less experienced presenters. Its an interesting call and made me reflect on how valuable it is when gardening to have the experience of ages! There are so many variables that it helps to have a lot of reference points to make good decisions, for example not to sow seeds too early!