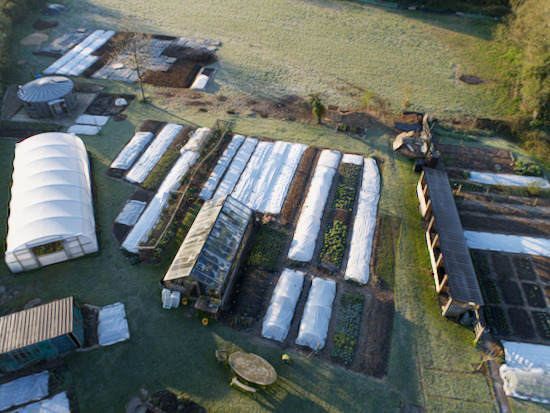 Weather rules.
This is turning into a difficult spring, with temperatures significantly below average – in particular by night. In the UK, there have been more frosts in April than in any other April since records began. Homeacres has had air frosts on 16 out of 27 days so far this month. The average night-time temperature in April has been lower than in January, and the lowest for the UK since 1922.. Plus it was very dry until 28th, when we were fortunate to receive 14mm/0.6in rain.

One positive is that sunshine levels have been high, and anyone with access to a little water has been able to keep new plantings watered. However, bottom line is that without warmth, plants do not grow and if you have not been using covers over new plantings, they will still be small, even struggling to survive. See more on covers in my new video filmed 24th April 2021, also in this video.

Covers I recommend include horticultural fleece of 25 to 30gsm/1 oz per yard approximately, and cotton muslin or toile if you have some of that. A cover directly on or suspended over plants increases growth in three ways:

A fleece cover does not actually keep out all the frost, as I notice regularly here. For example yesterday morning 27th, I removed a frozen cover of 30gsm “frost fleece” which was on lettuce, and many lettuce leaves were actually frozen. Fortunately this was -1.3C and not like a hard winter frost. By 9:30 am, we were picking leaves from those plants and they were very tasty! If the lettuce had been French beans or courgettes, it would have been end of story.

On 19th April, four weeks after we had transplanted the lettuce, I switched the cover from fleece directly on top, to Thermacrop suspended on hoops. The photo above left shows the result one week later, and the photos below show the process.

Also you can see how much the lettuce grew in one week after this (in photo above), following an improvement in the weather, with much more sunlight. Nights were still frosty but not quite so cold.

We have separated out the lessons of Course 3, to make them saleable as individual items. The photo gallery below is to give you an idea.

There are 30 lessons, some with more than one video. I have priced them according to how much information is in each lesson, and the length of new videos.

Early direct sowings this year are growing more slowly than usual, because of low temperatures. The covers have really helped, but even so my parsnip seedlings are so small, after five weeks.

For carrots, the intersown radish help by holding the cover above those tiny first leaves of carrots. Carrot seeds are particularly small, and need decent conditions for the first month as they establish. After that they become much stronger.

For the first three weeks or so after sowing, the cover is good when flat on the ground, because it holds warmth at ground level. This is one reason I don’t use hoops too much in early spring, another is that covers risk blowing away.

The CD 60 trays are proving good for most sowings, even broad beans. They are economical with compost. I am discussing compost with Moorland Gold, whose product is more variable since January.

For faster growing plants like cucumber and squash, I sow in the larger 5cm/2in cells of polystyrene trays (not now available to buy), which equate in size to Containerwise 40 L

You can buy my 60 cell trays from various distributors across Europe, including the Farm Dream in The Netherlands.

See my latest sowing tips in this video filmed 24th April. Don’t sow runner or climbing French beans yet, for outdoor planting, my 2021 Calendar is still relevant for all these dates still to come.

In terms of harvests, we are heading into the leanest month of the year. The merry month of May can be the hungriest for vegetable harvests, especially if the weather stays cool. And stored vegetables are finishing soon.

I am on my last jar of sauerkraut which still tastes really good, and I’m just eating the last apples, stored in boxes in my garage. While appreciating all the fresh greens, including the first asparagus (slower than usual), I still have some winter roots in the shed: Oxhella carrots, celeriac, beetroot and Charlotte potatoes. Also garlic, onions and Crown Prince squash in the house.

From sowings in summer and early autumn, there are quite a few nice harvests you can be taking now, in regions where winter is not too cold. Our lowest temperature this past winter was -7 C/19 F. Spinach can survive much lower than that, just remember to sow it in August.

Onions (and leeks, garlic) are hardy plants, as you can see from the first photo of overwintered salad onions. Also the photos are to show you how it’s fine to lay fleece on top of onion seedlings, whose leaves are surprisingly resilient.

Thanks to no dig, we have done almost no weeding on any of these beds. It makes gardening fun. And I use no fertilisers or slug pellets. Feed your soil life and they grow resilience, health.

I was delighted to make the first harvest of new lettuce, even after there had been a frost just two hours earlier. Once plants reach a certain size, they have sufficient roots to ensure that growth continues.

This is especially true now, when light levels are strong and long, equivalent to August in fact. Light can to some extent can balance the low temperatures, especially where covers are used. They convert otherwise-unused light, to necessary warmth.

One of the joys of summer has begun, namely bindweed! This one is the small leaved, pink flowering ‘field bindweed’ Convolvulus arvensis. There is also the climbing hedge bindweed (not in the area but in nearby hedges) with larger, white flowers Calystegia sepium.

I knew from seeing this area last year, that there would be a lot of Convolvulus, and we (mostly Adam, is @ads.wood on Instagram) are now removing the new shoots every week or so. See my captions to the photos, and module 4 of course 1 about mulching weeds, plus my Course 1 book.

This is an amazing resource, which you may be fortunate to have available in your locality. Do make some enquiries! Wood avoids the worries about weedkillers in composts – see this Twitter group if you are concerned about that.

For my commercial use I find it worthwhile to buy three ton loads, of new or old chip, for around £72 including VAT. Or sometimes it’s free!

As woodchip ages, it turns more and more to compost. We are trialling it’s nutrient content, after sieving year old chips to about 10mm size. In the sowing video I start a potting trial to compare it with potting compost. Its texture is nice and open, but nutrients are probably in small quantity for a while yet, because it still looks woody after sieving.

No dig in Bangalore

I was thrilled to receive photos from Bangalore in India, because I can share with you the success of their beds and the wonderful harvests they are taking already. Sekhar Reddy works as software engineer, has a family and little spare time.

He and his family are delighted with no dig progress, and all the food produced by their beds.