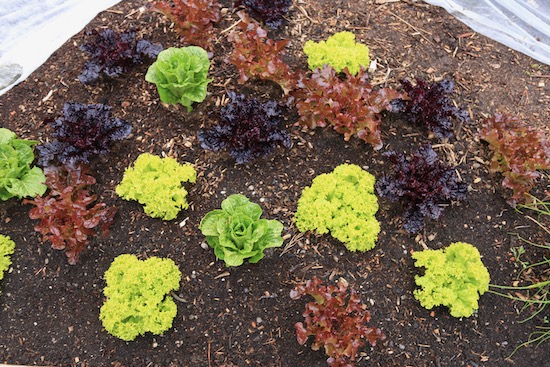 In gardening one is often comparing the weather and conditions with those of the year before. So far, spring 2021 has been diametrically different to 2020!

For those of you who started last year, you were blessed with lovely growing weather (in lots of north-west Europe at least), as long as you had access to some water. This spring has been considerably more difficult. Please don’t be discouraged if you are just starting out this year, we are because growth is unusually slow.

Ah Homeacres I feel confident that the last frost has happened, when it was -2.4 C on the 7th May. Night-time temperatures are now 4 to 8 C, 40s Fahrenheit, and daytime is more the issue, with a lack of warmth. Most days are 13-15C, high fifties F and no more. In these temperatures, and often wind as well, I recommend you cover new outdoor plantings of warmth-demanding plants with a fleece cover, just for the first week to help them settle. This includes courgette, squash, sweetcorn and (soon) summer beans. We even covered celery this week.

Both beds saw frost damage to young leaves where they were touching the covers, in the first week of April when night temperatures were -5 C/23 F. This prompted me to put wire hoops to support the covers, which I don’t normally do because of wind. The weather was not windy at least!

We removed the covers just before last frost, since these plants are frost hardy. Now we can see the difference in growth, between the two beds, and smaller plants which were under the muslin. It is an ecological alternative to fleece, and more expensive. More details in this recent video about covers.

Growth is slow but steady. Once again I would not have been without covers this spring. For example look at the reasonable growth on onions and broccoli, which have been under fleece until today!

They can grow fine in current temperatures, albeit more slowly than usual. The wind is perhaps their main impediment.

In a slow spring, the difference really stands out between new plantings, and those made last summer or autumn. Without the latter, it would be a very hungry gap!

The cool weather has actually improved the period of cropping by broccoli plants, which are still producing lovely shoots a full six weeks after starting. Lower temperatures mean there is less tendency to convert buds to flowers, which would then have woody stalks.

A big loser so far is asparagus. I don’t remember when it was such a slow start, with hardly anything so far from my two beds of 9 m/28 ft length.

This is high season for harvesting spinach, but not for sowing or transplanting it. If you managed to sow it under cover between mid-February and mid-March, you will be harvesting lovely leaves now. Likewise if you sowed it last August.

Make a note in your diary or calendar for this August to come, and have seeds ready.

There is still time to plant potatoes. You have lost only a little growing time, because of cool weather so far. We did a main planting in the new area on 6th May.

We planted them through polythene which is to reduce growth of bind weed, and we made slits in the black plastic with a trowel, vertically downwards to make a slit also in the ground/compost. Then we pop in the seed potato while holding the slit open with the trowel. It’s quick. See the latest video for new area and bindweed!

Most of my potatoes which emerged already have some burning of leaves where frost caught them. Some we earthed up with compost and some were under fleece, which helped at least.

Growth has been steady if not spectacular, and I am keeping covers on the beds for now because we need the extra growth which that enables., in current weather

We are thorough when picking, to remove any diseased leaves, slugs and the few weeds. This results in very clean plants, less slug damage and quicker picking the next time. Plants should carry on cropping for another eight weeks or so, with the next sowing in early June.

Now is the time! By the end of May, all being well you will have transplanted tomatoes, cucumbers, melons, aubergines, peppers, chilies and perhaps a loofah!

See this video for how you can put a string in the planting hole, under the root ball. Plant roots then hold the string in place and it’s one less thing to tie, you just need to tie to a support at the top.

At Homeacres, all my warmth demanding and frost sensitive plants are still in the greenhouse, see video here. Soon they will be going either to plant in polytunnel/greenhouse, or a few outside under fleece, without hardening off.

Another gem from First Tunnels.

All being well, we have some bees arriving soon. This prompted Kate and Briony to grow some wildflowers for them. There are many already in the pasture and hedges, and these will be a nice addition.

The first thing we did was to cover the ground with polythene, to weaken the growth of grass and weeds, before sowing on 7th May, just before some welcome rain!

97 thoughts on “May mid month, no warmth! but leafy vegetables are growing well, tips for new plantings and covers”