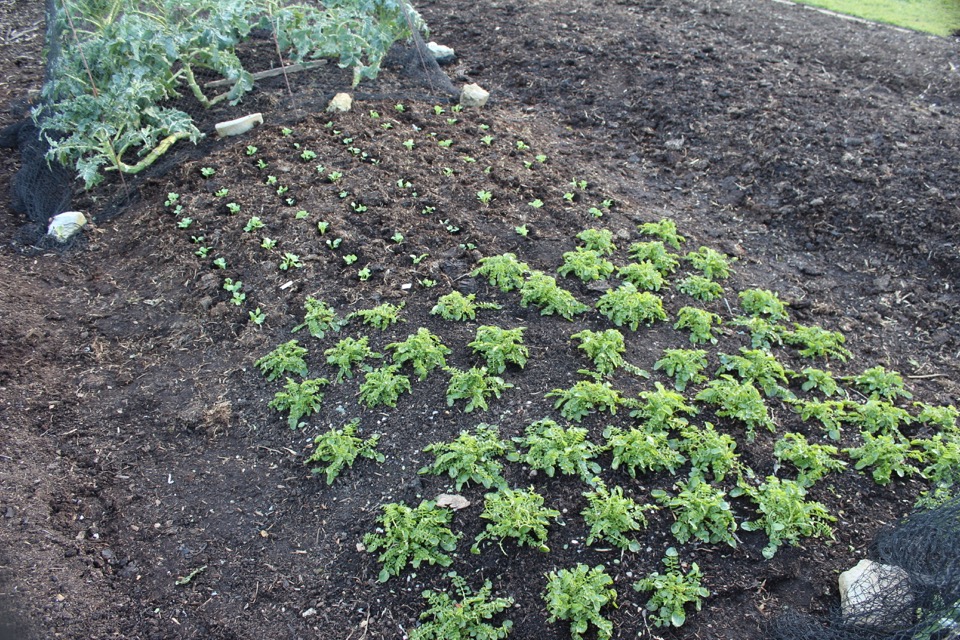 In most of Britain, the weather looks like staying dry until Easter, though cool overnight. Top sowings now include peas, lettuce, spinach, onion and spring onion, radish, beetroot Boltardy, early varieties of cabbage, calabrese and cauliflower, coriander, dill – and even first early potatoes, if your plot is not prone to late frosts.

If you need just a few plants of any vegetable, check this link for organic plants as it may be cheaper to buy a few plug plants, than to buy a packet of seed.

The manure word is used very loosely in garden literature and conversation, often without mention of its age and state of decomposition. Older (say 12-24 month old) manure, dark in colour and breakable into smaller pieces, is compost, into which you can sow seeds. As you can into a surface mulch of any compost – whether it was originally manure, or is from your garden heap.

Its easier when you have spread the compost a while ago, any time since last autumn, so that weather has loosened the lumps, such that simply running a rake across the top makes a soft tilth for sowing and planting.

If spreading compost now or making new beds, its still possible to sow small seeds such as carrot, as long as the surface compost is fine. In the photos below from 2012, I made a bed in early April from old manure (compost) and homemade compost, then sowed carrots straightaway, just to see how they grew. They were shorter than normal Nantes because the pasture weed roots were still occupying the soil below. There was a tasty harvest from June to August. If I had sown the carrots into this bed in June, they would have grown longer, as the soil below the bed’s ingredients became open to plant roots from above, thanks to the weed roots dying.

With early sowings, whether into dug soil or undug with a compost mulch, there are often more weeds to deal with than from later sowings, because the early spring flush of weed seedlings coincides with germinating vegetable seeds.

If you suspect that your soil or compost has many weed seeds, there are two remedies.

One is to sow a little later, after waiting for the first flush of tiny, tiny weed seedlings. As soon as you see them, run a rake or hoe across the surface on a dry day, as shallowly as possible, so they all shrivel.

Another is to sow fast germinating seeds such as radish in the same drill as say, carrot and parsnip. About one radish seed every inch, then after 2-3 weeks you can pass a hoe between the easily visible rows, marked by radish seedlings. The radish are ready to eat in May, when the main sowing is beginning to grow strongly.

I have had problems with onion seeds from Kings (mainly) and I sent them the photo below. There was a clear and dramatic germination shortfall, because I sowed their Santero at the same time as some Canto onion from Plants of Distinction, which emerged strongly.

Andrew Tokeley of Kings explained it all from their point of view: at time of my purchase in January, the latest germination test (he did not specify when) had given 84% germination. Then a test in February showed only 72%, “falling fast” as he put it but legal, as the minimum is 70%. Unfortunately for me (and I imagine others) I had sown before then.

So they sent me a free packet of seed. I said that is not a recompense for wasted compost, time and greenhouse space. He replied “that is gardening”, which is true to a point, but I think there is another issue. The 72% figure does not correspond to the 25% of my onions that germinated, of which about half are weak, so I have very few to plant, say 10%. However the temperature and compost were good enough to grow 90%+ of the Canto onion seeds.

Its frustrating, I hope your seeds are coming through, and of course it is hard to know if problems are from seed, compost, temperature, watering etc. All four photos in this gallery were taken 10th-12th March in or outside my greenhouse.

Its good to plant frost hardy vegetables now. And its especially good to lay fleece over new plantings, after (in dry weather) watering them in to help soil and compost settle around the roots.

We are setting out plants of broad bean, peas (mostly for shoots), radish, spinach and perennial kale. First early potatoes can go in now, whether chitted or not, but there is no rush, unless you are frost free quite early, say by the end of April.

It will be early April before lettuce and beetroot are ready to go out here.

These amazing plants are so hardy: most mornings in early March they are lying on the ground frozen, then look perky by the afternoon. Its misleading that they share the same name as runner and French beans which are not hardy at all, wait until May before sowing them undercover, and early June outside.

Peas and sweet peas are frost hardy too, sow them as soon as possible if you have not already.

Sowing ideas for food next winter

Ifs good to have a plan of sowing, based on what you want to eat, and when. For example the red cabbage pictured below was sown last May, planted June, harvested late October and has been in the shed since then.

The bean salad is Czar and borlotti beans sown mid May undercover, planted by early June and picked as dry beans from mid September until first frost. Then stored in jars.

Steph has been using the stored vegetables to make great salads and soups for Homeacres courses. On a recent course, one man said it was the first time he enjoyed beetroot, and her salad of grated celeriac/parsnip is a flavour revelation.

From now is good for sowing parsnips and planting onion sets.

We visited Dan and Amy’s plot of a few acres nearby at Barton St David, where they are expanding to create a CSA to sell vegetables to local people, from an acre of undug ground.

Over the past two years they have spread green waste compost, and feel now that the heavy soil is growing good crops without any more. This means some extra weeding and Dan has developed a hoe-scarifier, set up on two bicycle wheels, which run at five foot centres in the paths.

Also they have quite a collection of animals including these fine piglets, a New Zealand breed called Kune Kune. Their short snouts are less powerful for digging than other pig breeds, and they graze more.