The warmth of early May, combined with its long days, has resulted in rapid growth. What a wonderful change after a slow spring.

We removed most of Homeacres fleece covers on May 3rd, even though there was still slight frost at dawn. The important thing is that the cold winds had ceased and the days were becoming warm. Prior to that, all vegetables had benefited from the being covered for 3-6 weeks since planting, from onions and carrots to cabbage, lettuce, coriander, dill and beetroot.

Timing your sowings and plantings

May weather is usually vexing for gardeners with its rapid changes from warm to cold and vice versa. Its why I always respect the sowing timeline, in order to avoid raising plants in adverse or even destructive conditions. In spring, later sowings catch up.  For example its now a good time to sow runner and French beans, courgettes, cucumber and sweetcorn.

We are now passing beyond risk of frost in many areas but can still have spells of cold winds that damage tender plants of courgettes, runner and French beans, sweetcorn and outdoor tomatoes. A fleece cover can help them establish over the next 2-3 weeks, unless it warms up again. We are planting Czar and Borlotti beans this week and shall lay fleece over them for 7-10 days, then remove it and put in the canes.

Its been a productive spring for coriander and dill which are harvesting now, from February sowings undercover, planted late March and fleeced over. These herbs survive light frost.

They are good to sow again now for summer harvests.

Basil is sensitive to cold and I sowed it on April 6th, over the hotbed, with steady growth since. Most is now in pots for planting undercover next week, and I am careful to underwater the basil plants as the roots can easily rot if sitting in waterlogged compost.

Its the same story for cucumbers and melons – don’t overwater them when in pots!!

Spring is a wonderful time of new, zesty flavours every week. Spring cabbage are hearting, wild rocket and sorrel are in full flow and its time to pinch out the tops of some tall overwintered broad bean plants. This concentrates their growth into pods, and gives one less place for blackly aphids to land. The bean shoots are a tasty green.

It feels amazing to harvest lovely spears of asparagus, three and a half years after planting crowns on top of weedy pasture, with all its buttercups, dandelions and grasses left in place, with 5in (12cm) compost on top.

By April 2013 the perennial weeds were growing through and I was helped by Robin & Christina from Shipley to cover the areas between crowns with cardboard, then they laid landscape fabric over to hold it all in place. Through the summer I needed to remove occasional weeds that found gaps to grow through, then in autumn I removed the fabric to find a clean surface.

Since then the area has had a 2in (5cm) mulch every winter, of different composts, and weeding has been quick and easy.

I find that composting the polytunnel and greenhouse works best in May before planting tomatoes etc, and this year its been great to have Felix’s help for this. We have cleared almost all the winter salads before composting.

Meanwhile the garlic I planted between salads in November is enormous by comparison to the new planting, but I think they are good companions for now.

Making one heap and measuring its contents, then turning it and monitoring the temperature every day, has revealed one core thing about making compost in a damp climate with 40-50% green ingredients:

Too much water is a big problem. Water displaces air and I think that is why the heap temperature is only 44C at core, three weeks after starting. The contents ooze water when you squeeze them, and having a pallet underneath the heap is not allowing easy drainage.

And here is some apple blossom to enjoy. 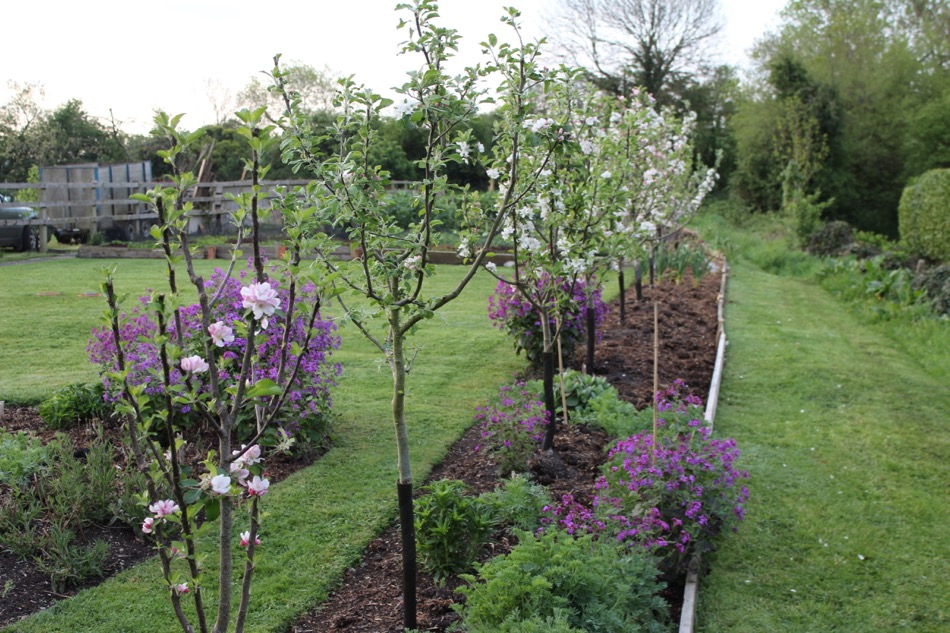 10 thoughts on “Mid May 2016, tender plants outside, herbs, asparagus, compost”

No dig, no till