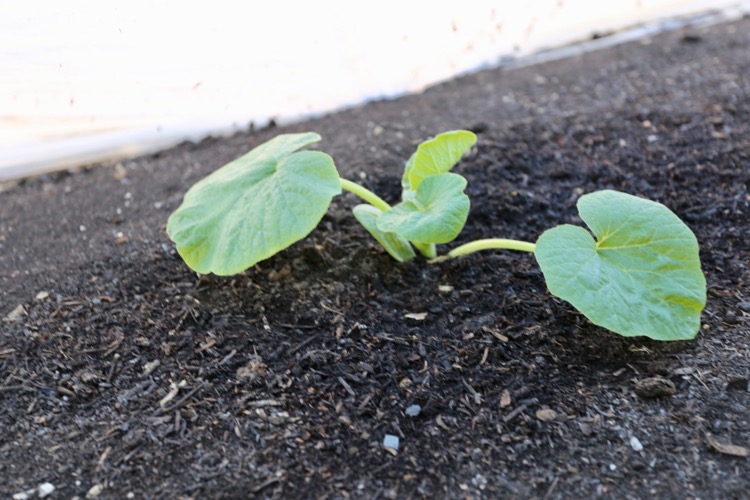 Summer is coming and it can be a mad rush, now that we can finally plant out frost tender plants. It may also be a question of finding space for them all!

Of earlier plantings, my greatest success this spring is Boltardy beetroot, multisown late February and planted a month later. It has lived under fleece throughout, just kept pushing it up.

A word about the forum, I am so sorry about the cyber attack. It has been difficult to sort out and my web team have been on it for a few days.

Steph and I shall be here until just before 5pm (selling books including hers), then we need to leave in order to travel to Cork that evening, for my day course at Ballymaloe on 20th.

I return to Ireland for a day course at Glebe Gardens on 25th.

Then on 29th I give a no dig course in the beautiful gardens of Marbury Hall, NW England.

I find it works to take plants from the greenhouse and pop into open ground, then cover with fleece for a week or so, unless the weather is hot. Our temperatures are 16-18C/low sixties F in the afternoon and 4—8C low forties overnight.

If you suspect a late frost, hoops to keep fleece off plant leaves will prevent damage where they otherwise are touching.

Beans and brassicas, courgette, French and climbing beans, leaf beet, beetroot, chard, lettuce, winter brassicas, salad onion. Plus leeks and winter squash by early May and swede at end May or early June.

Podcast about no dig, when Sarah Wilson interviewed me recently. Her channel has a refreshing and unconventional take on gardening.

This is my interview with no till farmer Jesse Frost. He broadcasts monthly, and says this broke all his records for listener numbers.

Many of us are aware of aminopyralid and the risks associated with using horse manure in particular, but I have still been caught out by damage from just a small amount in one batch of Homeacres compost. Perhaps the stables bought one load of hay from a field where this horrible stuff had been used. Last summer we used dry straw from the neighbour’s manure heap, as bedding for the urine side of my compost loo, then after a month we add this to the current compost heap. (I had been unable to buy small bales of straw after last year’s drought),

If you mulched with this hay, you would suffer the same problems of stunted growth and curling new leaves. Most at risk are legumes and solanums, hence my trials in the photos. I am having to put the affected compost on spare ground, to allow breakdown of the weedkiller by soil microbes.

Under cover mulching and planting

We have cleared the winter vegetables and spread the annual dose of compost. I wanted to use my own and could not, was helped by Woodhort of Sharpham, who delivered some old cow manure. I checked its temperature and it was 64C/147F, so not as old as the six months claimed, but I had no choice. Growth may be less brilliant!

Steph mentioned to First Tunnels that I was tempted to change models, in order to have straight sides. They offered to provide and erect a new one, next week. We have a day on Weds 22nd to take down the current tunnel, with help from the community project who are receiving it, Then I shall fleece new plantings until the new tunnel  is erected.

At Grizedale in the Lake District, June 30th.

“Lawson Park is a historic Lake District hill farm which has been HQ to Grizedale Arts since 2009. Head Gardener Karen Guthrie & colleagues are opening the house & garden to the public on Sunday June 30, with proceeds going to the Stroke Association. The extensive gardens have unforgettable views to the fells and Coniston Water, and include 2 large no-dig polytunnels and a terraced ‘Paddy Field’ where no-dig vegetable growing has been practiced for the last three years.

There is a new farming exhibition of photos in Nailsworth, Glos: agrarian renaissance by Walter Lewis.

You just need to keep pulling new shoots of marestail, as often as you can, to deprive the roots of new sustenance. Gradually they weaken.

Also keep paths clear, and mulch or mow edge areas, to slow any spread in from the sides.

Ants are difficult but they don’t like moisture, or spiciness!

Keep soil moist, try during say 1 litre of water per nest, and the water has chilli extract, for example boil a few chillies just for 5 minutes. It was effective in my greenhouse but some have come back, a year later.