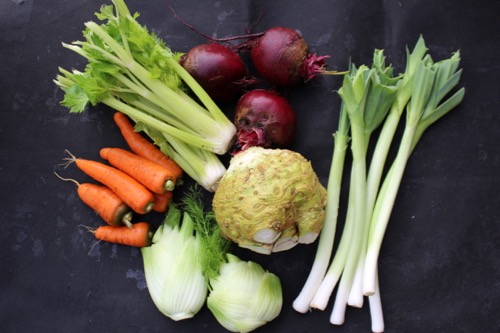 It is full-on autumn now, the season of important harvests and of final plantings before winter.

Some of the visitors to my garden in the last two weeks  have expressed surprise that beds are still full of vegetables, and I explain how its the result of continuing to sow and plant through June, July and August. So if you have more empty spaces than you would like, check my sowing timeline for what you may have missed.

As well as vegetables, I have sown some mustard green manure on a few beds where crops have finished, except for those where I plan to sow broad beans or garlic, both in November. Previously I have sown garlic in October but noticed this spring that November sown garlic had rather less rust, a disease which has reduced my harvest in the last two summers. Also some garlic I sowed in the greenhouse and polytunnel, between salad plants which cropped all winter, grew healthily and to a huge size, so I recommend that if you have some undercover space.

This amazing method of growing continues to fill me with wonder, even after 35 years of great harvests and much time saved, compared to the problems I see elsewhere. You need to be organised with mulching then everything else is so easy. Just look at the parsnips in the photos below –  I needed leverage from my copper spade, first on one side and then on the other, to extract that amazing length of root. The soil on the roots was dense and sticky, a clay loam which needed scraping off.

Yet many still say that “no dig is not for heavy soils”, or “you need to dig first”. Evidently this is nonsense. In fact at the Wells Food Festival on Sunday a gardener was telling me how, after buying one of my books at RHS Rosemoor, he decided to adopt no dig, since it makes so much sense. He said the results have been fantastic and he has saved a lot of time and effort, even with having to use expensive compost in sacks. So then he went back to Rosemoor and could find evidence only of digging and lots of weeding needed. Why are the RHS not interested in demonstrating this way of growing? For example the parsnips here were so simple – I had spread two inches of green waste compost the previous November, sowed the seeds into that, and they grew, with almost no weeding needed.

Here are some photos to illustrate how we just made a new bed, no dig. A neighbour had given me topsoil from an unwanted raised bed, and three inches of that went straight on top of weedy pasture, after laying cardboard where the path will be. Then a two inch layer of half rotted cow manure – this bed is for raspberries. We fished through a heap of delivered cow manure to use up the more strawy lumps, then shall be spreading the more decomposed remainder on beds for vegetables.

If this bed were for veg, I would spread compost/well rotted manure and break up the lumps more. Also you can make beds without soil below, its an option according to what is available.

You can leave fruit on the plants to continue ripening, but its a slow process at this time of year and sugar levels are less impressive. I reckon its more worthwhile to harvest everything, clear and plant for winter, whatever plants you have raised, also you can sow carrots now, undercover, for harvests next spring.

Tomatoes have cropped well undercover and there were not too many green ones at the end, thanks to picking out all growing points from early August, and no watering since mid September. Now we have an eye on recipes for pickling or using green tomatoes in a curry.

We are making final plantings of Grenoble Red lettuce, Fine Maraichere endive, mustards, salad rocket, leaf radish, chervil, coriander and claytonia which were sown in September. They are bursting out of their module trays and keen to find the ground. Prior to planting and after clearing tomatoes etc, I walk on the compost-covered soil to firm it back again, also to break any surface lumps, then water thoroughly before planting. Josh Rogers has been helping with this. I add no more compost until next May (three inches at that time), finding that once a year is enough for both summer and winter crops, with no other feeds or fertiliser given, at any time.

You can still have excellent harvests off established plants. But new plantings can only establish now and are unlikely to give many worthwhile harvests for at least six weeks, longer if it is cold: I had some mustards left after planting the tunnel and we popped them in where we had cleared some climbing beans – we shall see what they give.

Chicories come into their own now, with lots of leaves in their hearts, also Chinese cabbage.

This is a great winter standby and you can see the excellent results from sowing at the right time and giving some water in summer dry spells. Also I find that covering with fleece for 2-3 weeks after mid-May planting, helps celeriac to get away in spring, the same for courgettes and winter squash. It made a difference to summer beans too, the ones I fleeced have matured earlier and ripened better.

Also I show a photo sent to me by a couple who came on a course here, then grew lovely celeriac on sandy soil, which is normally more difficult because of small moisture retention. No dig with a compost mulch is really helping.

Our lovely butter beans of Czar runner bean plants, and Borlottis too, have been drying on the plants, to harvest once they ripen. With the Czar I usually pick the pods when yellow or brown, shell them out (helped by Charlie & Josh this week) and lay the beans in trays on a sunny windowsill until dry. You can also pick them when pods are green, for eating the the white Czar or borlotti beans fresh, they are delicious.

If a frost is forecast, it is worth harvesting every last bean, but frost is hard to predict and in fact on 12th we harvested a lot of beans, because a frost was forecast, and then it did not happen!

And finally, an update on the potatoes I planted on August 8th – it was not really worth it, that is the harvest from 5 plants, which all suffered blight. Just the Maris Peer have resisted and are ready to harvest now or soon.