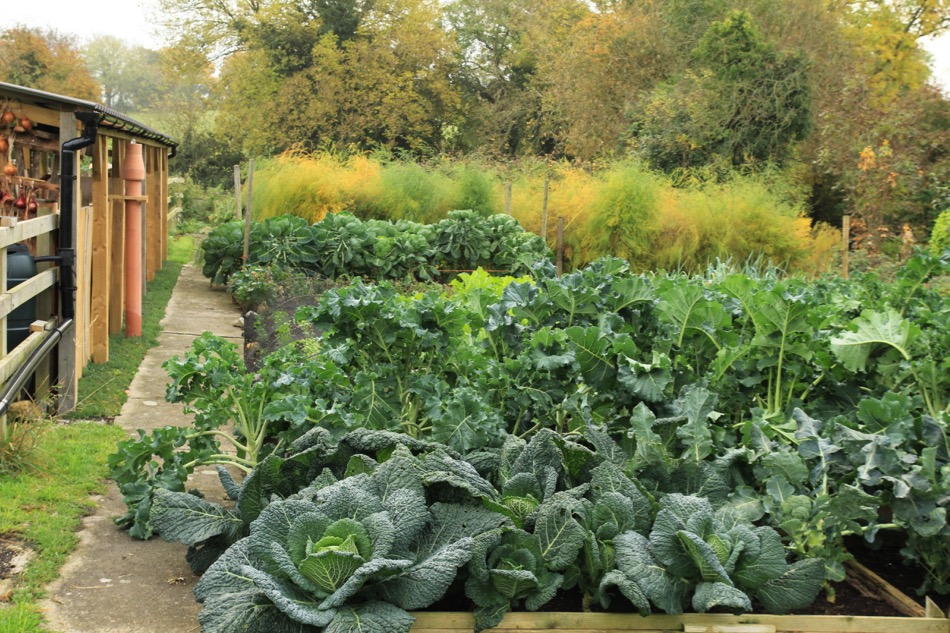 Winter is nearly here, time for some last and beautiful autumn harvests. The radish below were sown between lettuce which were still cropping.

You can still sow garlic, and November is excellent for sowing broad beans, straightaway in northern Britain, and until month’s end in the south.

Beetroot and other roots

When to harvest depends on upcoming frosts, I leave as long as I dare so the roots stay fresher, but because beetroots are mostly above ground level, they are damaged by temperatures of about -4C or less.

If your area is prone to cold nights, they are worth pulling before next weekend. Carrots and celeriac are alright for now, parsnips will grow sweeter in the cold. Apples and pears want picking if you still have some on the tree; I harvested the Concorde pears on 30th October.

There are a lot of harvests still to come in these photos of Homeacres, October 30th 2016.

Fennel needs picking before frost, although calabrese has some resistance, especially for smaller shoots. Kohlrabi also are not killed by frost but risk some damage to their bulbs, which are just so tasty at the moment. And they are tender, unlike large kohlrabi in summer when they turn woody: these bulbs are watery and tender.

We have had fascinating harvests and comparisons, for example how an east wind (abnormal direction) blew the kale of my dug bed to an angle, while the kale in no dig stayed upright.

Harvests in the last six weeks have been bigger on no dig, I am posting them on this link. Totals for the year are 98kg dug bed and 108kg no dig.

I sowed a week later this year, partly to see and partly from being busy writing the diary book, and plants are smaller than they should be really. However if autumn were to stay mild, as in the last three years, all would be well…

At least the establishment is good, with almost no slug damage, thanks to no dig, no weeds, and having watered the summer crops very little during the month before clearing them in mid October.

After removing the summer veg with as little soil disturbance as possible, we walk on the beds to consolidate again, break up any lumps of compost, then water a lot before planting. I spread no more compost until May next year.

Growth has been steady in October and the dry weather has helped tatsoi and pak choi, thanks to reduced slug numbers. Red Lace from CN Seeds has impressed me, as did a mid July sowing of Winter Density lettuce which is still healthy.

The Joan J I planted in January, into a mulch of soil & compost over weeds, have been cropping superbly. I am so pleased we dug out the bed of Autumn Bliss last autumn, they yielded poorly.

Do consider Joan J if planting raspberries, and Paris looks another good option, it claims to crop in summer too…

Now is time, worms are hungry. A one to two inch layer over all beds is good, even a half inch is good if you are struggling to find enough compost. Check stores such as Lidl who may be selling off ‘old’ compost.

For no dig, is it a good idea to dig before starting?

Steph says there was a lively debate about this on Facebook’s Undug group, triggered partly by comments I have made in books, about how I sometimes started with soil cultivation. That was years ago, and for the record I give these details, to avoid misunderstandings.

When making my first garden of 1.5 acres in 1983, I had not heard of no dig and nobody mentioned it.

The only way I knew was to cultivate using a tractor, in order to kill the pasture grass. I started with a borrowed Keminck tool, designed to aerate as well as cultivate. But it did not kill all the grass and one afternoon my father appeared, looked disdainfully at the results and said “you need to rotovate”. Now he was a man of few words, in fact we hardly ever conversed as he worked 99.9% of the time, so I paid attention to those few words!

It was a dry August and I rotovated four times at two week intervals, luckily the dry weather meant less worms near the surface, and all grass and weeds died, except for couch grass in some edge areas. Soil was a loamy brash.

Before the last rotovation, a contractor spread two inches of cow manure.

Then from October to Christmas, I dug out pathways of two feet wide, shovelling their soil onto what became raised beds.

For areas over an acre, (tractor) cultivation makes life simpler, but is not necessary for smaller areas, certainly not in gardens! See this link.

There is no need to dig/cultivate before starting no dig, unless soil is truly compacted after passage of heavy machinery in wet weather. Even then, you can manage without soil loosening, with beds created from 6in/15cm compost on the surface. Crops grow in that while worms and soil life heal the soil below, over time.

4 thoughts on “November 2016, harvests before frost, veg for autumn and winter”

Mid May 22 many new plantings, make lots of compost, my trials of propagation and other composts