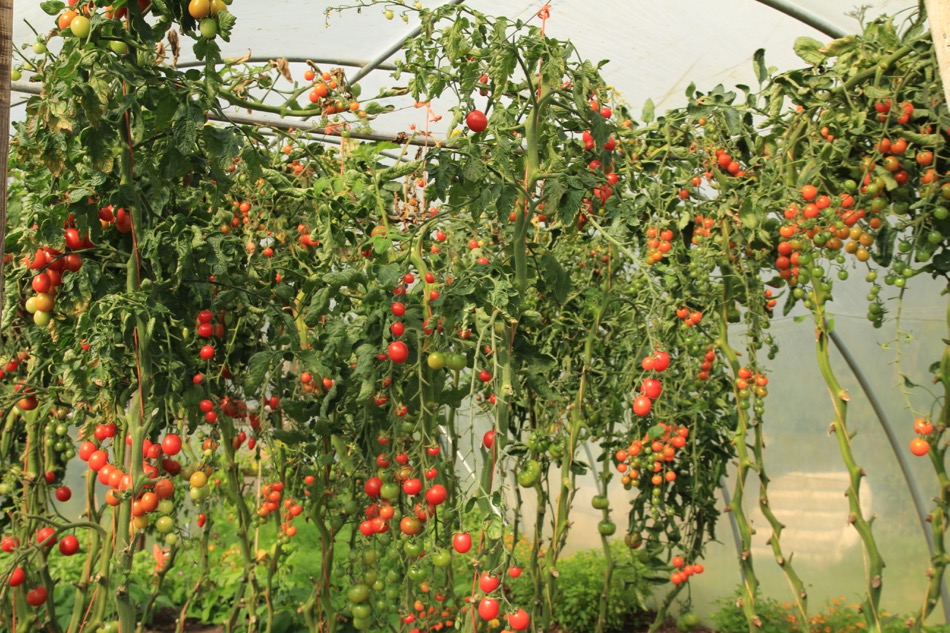 In recent years, October has been milder than average, sometimes with nicer weather than the preceding summer: last year it was 18C at Hallowe’en, the year before it was 21C! Its looking to be warm this year too and my aubergines think summer is going on.

Do check the forecasts, because temperatures affect harvest dates – for example bring all squashes and pumpkins indoors before frost. Store them preferably in the house where their skins stay hard in the dry, warm air.

October is a big changeover month with the last summer vegetables to enjoy, and the first winter ones coming ready. Cabbage hearts are still swelling and firming, kohlrabi are bigger each week.

Leeks such as Autumn Mammoth are eating now and also make significant new growth in October.  In contrast, late-maturing leeks such as Musselburgh have a lot of growing to do, until March or April, and a mulch of compost between their rows is worthwhile, unless you did that before planting.

Celeriac and beetroot swell noticeably in October so they are best harvested in November. Whereas carrots are worth lifting sooner rather than later, before slugs and root flies become too interested.

The season of abundant harvests give endless possibilities in the kitchen. Steph has surpassed herself at recent course lunches and finds it difficult to stop making new dishes, time permitting.

Frosty nights have variable results: even a slight freeze kills all cucurbit and tomato plants, hearts of lettuce too, while cabbage hearts can tolerate temperatures down to about -3C. Dense hearts damage from being split when frozen, while loose hearts such as savoy cabbage can flex with the freeze and also improve in flavour, in the same way as Brussels sprouts and parsnips.

Clear and spread compost, one space at a time

Now is a good chance to weed soil and, on any cleared areas, spread compost which feeds soil and plants throughout the coming year. By spring the surface will be more crumbly and suitable for sowing and planting: you need to weed and lightly rake the surface in March.

Compost of 1-2in depth is good, enough to cover the surface completely. If its lumpy, use a fork to break it into small pieces before spreading, and then frosts will break the lumps some more.

Paths can be mulched too: if they are weed free, spread an inch or two of wood shavings or woody compost of any kind. If there are more weeds than you have time to pull, lay cardboard before spreading the woody layer.

If your beds have wooden sides, the fertility of paths and their weediness is less of an issue because sides prevent weeds from encroaching, except for some perennials such as couch grass. Some gardeners are happy to maintain mown grass between beds with sides, others like gravel.

My preference is for no sides and narrow (12-18in) paths, which I keep weed free and mulched. Then vegetables can root into and grow over paths, so they are not wasted space at all. Even a 12in (30cm) path is feasible for a large wheelbarrow, because with no dig there is no compaction damage caused by temporary weights on the soil, in this case from the wheelbarrow legs.

Now is a good time to plant garlic, preferably and most cheaply the cloves of your best and largest bulbs; there is no need to buy fresh seed every year. Also you can now plant sets of onion varieties such as Radar. Also plant (not sow) spring cabbage and spring onions, asap.

Outdoors in the south its just possible to plant (not sow) mustards, spinach, mizuna and rocket.

On September 12th we sowed radish between lettuce and they should crop in three weeks.

You can stop watering tomato plants in soil, completely, to encourage ripening. I last watered mine on September 21st.

I reckon to clear them mid month, water thoroughly and then plant winter salads, spinach etc which are growing now in modules. I experimented with sowing later, around the equinox, instead of on 12th.

Steph and I enjoyed the second day of a biodynamic conference at Ryton Gardens. It included a talk by Robin Baxter about the successful use of bees in Ryton prison, which is engaging and interesting many prisoners. They use the approach of natural beekeeping as championed by Heidi Hermann, who had a stand at the event and I was pleased to meet her,  am encouraged to buy one of the prisoners’ home made hives to install at Homeacres.