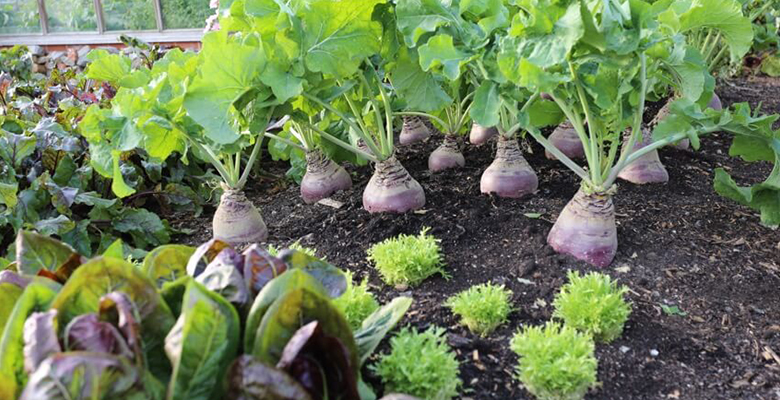 Autumn has brought just 41mm/1.6in rain here so far in October, encouraging new growth but not yet enough to soak into the soil, which is still  dry below 4-6in/10-15cm. The average temperature has been above average: 10C/50F by night, with one slight frost, and 16.5C/62F by day.

Now is a season of last plantings, many harvests, first mulching of soil that is cleared, and it’s a great time to enjoy the beauty of what you have grown.

To discover how I maintain a garden like this, with a small input of time and effort, see my online courses.

Every month is a ‘new season’ and it’s one of the best things about growing veg, how the garden and meals just keep on changing. Now there are so many lovely autumn flavours, and plants look beautiful too: my favourites are brassicas, spinach and celeriac.

Keep plants tidy by removing old and yellowing leaves, to reduce slug numbers and keep yourself fully engaged with all new growth.

There is much green matter coming off the garden now from vegetable trimmings. These are more green than brown so it’s good to add browns too: fresh or older tree leaves, old wood chip, crumpled paper, cardboard, woody prunings chopped up, even some soil to balance the compost ingredients. There may be enough soil on weed roots to keep a balance.

I aim for roughly half green, half brown by weight, which means three quarters green by volume. Other green materials include fresh manures and coffee grounds. If the green goes more than about 60% by weight, heaps go soggy and airless, or may heat above 70C and kill beneficial microbes. Slower and cooler compost is better for fungi, but below 50C there is the chance that weed seeds survive.

What can you sow now?

It’s too late for sowing almost anything except onion sets, garlic and broad beans. For garlic, break up your best bulbs and pop the larger, outer cloves into dibbed holes, then mulch/cover with compost.

In the south of England I suggest mid November for broad bean sowing, not now, or they grow too tall before winter, and are then vulnerable to wind and frost.

There is confusion over this because of random swapping of the two words. I suggest you be really clear on the difference between sowing seeds and planting plants.

It’s now too late to sow them but before the end of October and in milder areas, you can still plant spinach, salad rocket, oriental leaves, coriander, chervil, spring onions, land cress and lambs lettuce.

I updated this whole book and Steph added some fine recipes. It replaces the 2008 edition which was not on photographic paper, so this is all colour with many more photographs.

No dig and less watering

I was fascinated to hear from Dag Jorund Lenning about how crops fared in some trial no dig beds they made mid May, in Stavanger Norway. The ground was compacted pasture (he has a “cpmpactometer” device to measure it!) and they spread half compost, half wood chip of green wood not brown. Plants were watered after planting on 22nd May, but then not revisited for two months (!!) in extreme drought and heat. They wrote them off, in their minds, but went to have a look in late July and found,,, growing crops. This made the national headlines in Norway.

Dag is organising a conference in March on soil and growing, with Elaine Ingham, Joel Salatin and myself, an English version of the programme is coming soon.

This is Neil on a forum post early October: During this summer we had the sum total of 4 good days of rain in SE London, from 28th to now.

Reflecting on the no-dig in my second year, I consider this practice now to be absolutely essential, especially as my allotment rules only allow watering by use of watering cans.

Most allotments around me are empty, and will remain so until April or May next year, but I am (rather smugly) walking away each day from my two plots with enough for myself and my neighbours every other day. I am still harvesting salads, radish, mooli, broccoli, cabbage, autumn rasps, physalis, carrots and the oca and sweet potatoes are still growing.

I feel that with the concerns in the news about global warming being ramped up, no-dig gardening could possibly get more traction if it was called low-water gardening.

Under cover last of summer, first of winter

It’s changeover time. We have removed almost all tomatoes now and half the salads are planted for winter, from September sowing. These plants will start cropping from mid November and continue until April, all being well.

No dig, the reasons for and Charles’ History

Article: A taste for growing