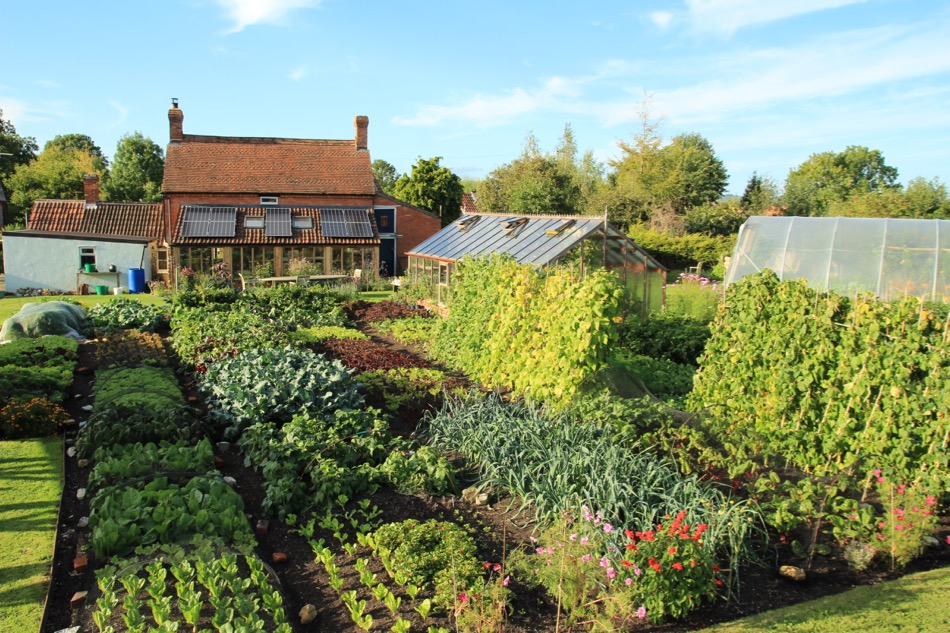 At Homeacres, the first ten days of September were a gardener’s dream. Summer warmth continuing, of (average) 14C 57F by night and 21C 70F by day, also with 47mm (1.9in) rain falling onto dry soil. I have noticed very few weed seeds germinating after the rain, except where soil was disturbed pulling up potatoes.

Every square inch of my ground has plants in at this time, the last plantings almost all of salads because I am selling leaves until Christmas. If you have gaps appearing, its a good moment to sow white mustard (Synapsis alba) for green manure, which is killed by moderate frost, so no worries about clearing or heaven forbid, the commonly-advised ‘digging it in’. Rest your spade in winter, except to plant trees or clear brambles.

Harvests and sowings of early autumn

When assembling vegetables for a photo on 8th September, I was struck by the warm theme of autumn reds, yellows and oranges. Vegetables have stored the summer sun and are holding it for us, some such as onions throughout winter.

Growth is still fast, but in about six weeks it will “fall off a cliff” as days darken and nights cool. So its time for sowing many vegetables to grow undercover, such as salads, spinach, chard, kale, spring onion, spring cabbage, coriander and chervil. They can then establish as small plants before winter sets in.

1 Fill module trays with multipurpose compost and sow two to four seeds in each. After 10-14 days, thin to the strongest, good for lettuce and endive. Or for plants which grow well as pairs or threes, such as rocket, mustards, spinach and chard, leave two or three seedlings in each cell. And for spring onions, sow 10-12 seeds so you will be planting a clump of onion seedlings in October.

2 Fill a seed tray and sow lines of seeds, for pricking the tiny seedlings into module trays after 5-7 days. This is good when you are short of time at sowing, and want one plant per module, and it gives sturdier plants because you can bury long stems when pricking out.

3 Sow direct if ground is bare, although undercover this is a rare thing in September, when tomatoes, peppers and many other summer crops have plenty of fruit to ripen. You could sow into any empty space outside, then cover with a cloche some time in October.

Lettuce are ripening their seeds now, the small yellow flowers becoming balls of seed with white fluff on the ends.

I found that rubbing the seedheads between two pieces of wood serves to loosen most seeds, over a sheet for gathering up. At this stage you have a lot of fluff and other plant debris with the seeds, so so do a careful winnowing in any light breeze to help the chaff blow away.

The main other seed I harvest at this time is runner and French beans, once their pods are dry and pale coloured. This year’s crop of Czar and borlotti beans look promising, though less so on beds where I am trialling no-rotation. In this fourth consecutive year of bean plants, they are dying off already, with a fair but not brilliant harvest. On a bed where I had not grown beans before, they are more abundant, from the

Thanks to the many visitors from far and near, at least 200 and probably more, Homeacres was buzzing in a party mood on 4th September. Steph did a bake-off the day before and produced a dazzling array of cakes, I am sure she should be featured by Mary Berry. Then she set up a bookshop in the compost bay and sold 36 books in the afternoon.

Meanwhile my son Edward and her daughter Caitlin organised the cakes and teas, with visitors donating £460 for Send a Cow.

An unexpected attraction was a huge, fast moving caterpillar of Deaths Head Hawkmoth, spotted by a visitor.

We were fortunate that wind and weather fronts passed over the day before, then gave more rain on Sunday evening.

Bounty, but I have two failures

Its been a productive year for all vegetables except these:

By comparison, back in May I had helped Steph plant some of my leftover celeriac on her allotment. She has not watered them and they are smaller, still a good size and they have healthy leaves. Less is more!