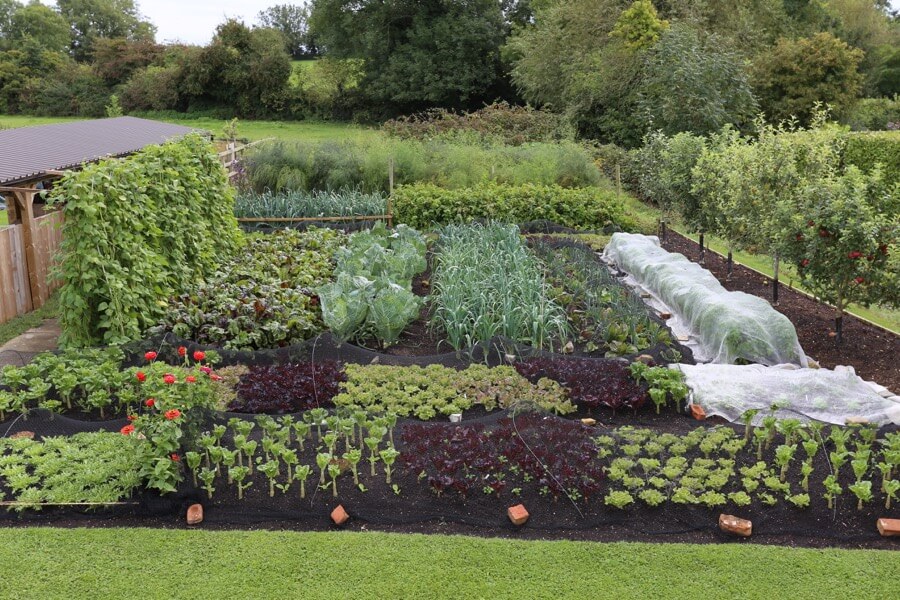 New season and Homeacres news – autumn is near and we need to prepare. Make new sowings, continue weeding and tidying including old brassica leaves and leek rust, watch for pests and tomato blight and enjoy the harvests.

It’s been nicely busy here with the release of popular new videos, my 5th summer of no dig including all the fruit and flowers, and the visit of Huw Richards which resulted in his video interview of me in the garden. Our new book continues to sell fast and we shall have a bookshop at the Open Day on Sunday 3rd. Courses are sold out in September except for three places still on 20th September, and we are posting a new weekend intensive course on 25th-26th November.

September is key month for sowing winter salads and the timeline has more details.

In southern UK be careful of sowing too early, in northern UK you want to sow now or soon. Although September’s first week is often still summery and plants can grow as fast as they have in August, especially brassicas. You can set plants out when small, just 2-3 weeks after sowing.

New plantings at this time of year sometimes need to happen where an existing crop is finishing, as long as there is space for new plants. Lettuce is suitable especially after you have picked it. The lettuce will crop for another 2-4 weeks while new crops establish.

The bare bed was recently cleared of wild rocket.

The joy of sowing and planting in summer

Continuing from the above, I am always amazed at the speed of growth of new plantings in summer.

Whereas from now, growth is about to slow significantly so hasten to make sowings of spring onion and spring cabbage, both to overwinter as small plants.

Each garden or allotment has different pests. Once familiar with what is likely to eat your plants, you can work out pest control.

Here I do not have pigeons at the moment, but rabbits are often in the garden. They like seedlings more than plants so I cover new plantings for three weeks or so, then remove the mesh, or fleece in cooler weather.

I use a Bacillus thuringiensis spray on brassicas, which gives indigestion to caterpillars but does not harm other insects or mammals. It’s a soil bacteria available to buy in powder form.

No dig compared to dig

More interest comes from this trial. After the harvest of potatoes, we planted celery on 1st July, and those on the dig bed have grown faster: perhaps disturbing the surface at potato harvest damaged the fungal network.

In contrast the beetroot and French beans between the celery and parsnips, planted late June after peas, have yielded better on the no dig bed.

Oh dear! I have had problems from not paying close attention to my polytunnel tomatoes, and from allowing too much growth at the top where some leaves were in contact with damp polythene, even after pinching out the tops on 10th August. I could barely see what was happening in the mass of leaves. It has happened very quickly!

Highly humid air in the warmth of 18th-20th August triggered the outbreak and I fear for most of the plants over the next month. It’s gutting, as some of you know! At least the drier greenhouse has no blight for now.

Outdoor plants bred by the University of Gottingen have fared better – Resi, Dorada and the two mentioned in my caption.

This method has aroused interest and the photo below shows plants in November, from potting 3-4in/7-10cm side shoots in October. Just in compost, no rooting powder. Plants often grow too big in my conservatory over-winter, too leggy in particular, so sometimes in February I “start again” by potting a side shoot from the tall plants.

I have grown two varieties and initially  was worried that the Prague Giant was not going to make bulbs. Compared to the trusty Prinz, they had massive stalks of pink-stemmed ‘celery’ and little visible below.

However in the last two weeks, the Prague Giant have been showing bulb growth and it looks a fascinating autumn to come.

Feedback on no dig, mostly You Tube

From Fiona Midgley on You Tube (Seed Saving video)

Charles, I just wanted to share my experience of No Dig carrots with your other subscribers. My plot is on heavy clay and my fellow holders informed me I’d have no luck growing them. I sowed seed on to my No Dig beds remembering you saying they would germinate in the compost, crossed my fingers and hoped for the best. Fast forward a few months and I have AMAZING carrots, most of which are straight too. Can’t wait to have a peek at the parsnips. Thanks Charles. sep17 mostly Nantes carrots 24 weeks since sowing

“I only wish i had heard about you years ago, I would have have saved so much money.”

Thank you for the info about enviromesh. I’ll give it a try, it’s something different (at least for me, I’m fairly new to gardening. I used BT a couple of years ago & will again this year, as you mentioned, it works!!. I was experimenting with putting nothing on my plants this year (e.g. no organic insecticides or…anything), but the moths are in full force.

From Amanda Baker in Canada

Even here in Canada, at my community garden, I was looked at like I had 2 heads in May when I told a couple of people about gardening no dig. Last week, the lady who runs our garden made a comment that what I was doing was obviously working (mine is probably in the top 2 producers, and it’s my first year gardening!). I really hope she decides to give it a go, because she’s older, and it’s so unnecessary to tax her body like that. We’re also expanding in a couple of years, to grow food for meals for the lonely & disenfranchised (the church where our garden is, is having another church join their congregation and form a new church, and that one does the meals already, so it seems a logical progression). If she wants to do no-dig, then it will be much easier of course, but I think a lot of the seniors who attend the 2 churches would be interested in helping out, and it would be much easier for them too.

Comment 28.8 to my multisowing video from Márizá Epicentro in Brazil:

“In our semi-arid conditions (in Brazil) , we never had time to get good beetroot. We tried this idea in our shadehouse, and were able to plant them out, so, for the first time in our 15 years, we actually have hopes of producing beets!”

Q I have a question regarding the median you are using in the white trays for growing seedlings? As shown in the videos when you take a plug out it stays together for planting into the garden—my plugs that I start fall apart when I go to plant them.  My planting mix is peat moss  & Miracle grow purchased at my local garden nursery.  I am assuming that your mix is straight compost.  Please advise.  Thank you in advance for any info you may offer regarding this matter.  Don.

A Its commercial organic multipurpose compost, half peat and half garden wastes, with animal manures. The main point is to FIRM it into the cells when filling, push hard! I suspect that is why yours are falling apart. West Riding Organics is the compost I use, or Klasmann is cheaper. Melcourt is a peat free compost though not organic.

And to finish, from WW Suwannee – hot weather greens

You can grow all varieties of sweet potatoes for shoots, and tops of yard long beans. I believe there a several cultivars that are bred for shoots only. I see you growing all those delicious greens in the summer, there is no way I can do that here (Florida), so I have many hot weather greens tricks.

4 thoughts on “September 17 sowing for winter, controlling pests, blight, more on no dig”

Dealing with bindweed, the long haul and mulch reduces the work