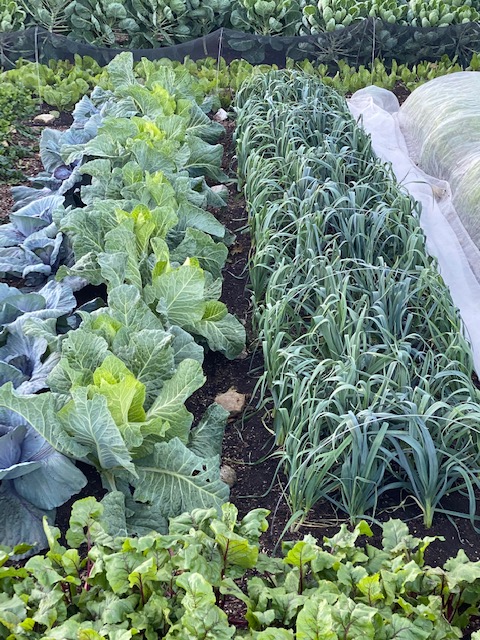 Growth this summer has been strong and abundant, with few weeds thanks to no dig. The garden is full, but we are still finding just enough gaps to set out new plants, and making new sowings in trays, see below.

So sorry we can’t do it. Here as a small recompense is a video tour of the garden, filmed 31st August.

In early September you can sow lambs lettuce (corn salad), mizuna and salad rocket in any spare corners outside. For salads to grow undercover through winter, this is prime time to sow a range of vegetables and herbs, from lettuce and endive to mustards, land cress, winter purslane, sorrel, tatsoi, coriander and chervil.

It’s still just possible to sow spring onions and spring cabbage. Don’t delay even one day, for these plants to have time to grow large enough to survive winter.

Before transplanting in a few weeks from now, it’s good to spread compost for the year ahead. Also a little woody material on paths, no more than 3cm. This helps path soil to stay fertile, and roots can use it for food and moisture.

The harvest of apples here is not good, after too strong growth in April, followed by the frost of 12th May. Only a few fruits survived in Homeacres frost hollow (!), and many have coddling moth, or are rotting. Just too weak.

It’s similar with my Apple iMac. It failed on 21st August, never to power up again, and  was only just accepted by Apple for repair. It is 17 months old.

Photos for this blog are from my (Apple!) phone.

Brassicas including Brussels sprouts, cabbages and kale have benefited from the rain. However, butterflies and moths are not deterred, I spray brassica plants with Bacillus thuringiensis every 18-20 days.

This worries some, because of the use of Bt in genetically modified crops such as cotton and corn. This does not make Bt bad of itself, nor does it make cotton and corn bad! Bt is simply a soil bacteria

We are picking lower leaves of kale, not too many, keeping all brassica plants tidy too. Simply remove lower leaves before they go yellow. One result is fewer slugs under the plants.

How to judge ripeness

I covered this in my melon video. Fruits turn soft, or change colour. Cucumbers turn from pale to darker green then more yellow as seeds form. Watch fruits to learn the stages.

Winter squashes may now  be close to harvest, and watch for the stalks drying, the key sign. They are maturing here earlier than normal.

Dig, no dig so interesting

Cucumbers suffered more mildew on the dig bed, carrots come out cleaner and larger from no dig, French beans are better on dig, and celeriac looks stronger no dig.

Both beds measure 1.5x5m/5x16ft, and have the same amount of compost once a year. Yields from the year’s first plantings were  46.4kg dig bed and 52.5kg no dig. We weigh vegetables trimmed and kitchen ready.

From second plantings, up to 28th August we have harvested 13.1kg and 16.1kg respectively. Over the year, no dig is 20% ahead, similar to the previous two years. All from 4cm compost last December, plus a few handfuls of rockdust. No feeds, no Grow more!!

New book is out, and Calendar too

It’s been a big project, creating the large book. It’s based around my first online course, and includes the quizzes, with answers too. And it’s hardback, so heavy, as Martin and I noticed while unloading the 3 tonnes of books to Homeacres! They arrived just before the thunderstorms.

The book covers no dig history, my trials here, how to smother weeds, how to make and use compost, and the difference between compost and soil. It’s 240 pages, 84,000 words, 900 photos. Signed copies from this website, also in UK shops, and in the USA from Chelsea Green Distributors, once the boat arrives.

The last two chapters are plans and harvests of the small garden, and one bed by the shed. Examples of growing a lot, through all seasons, in smaller areas.

There is often very little free space at this time. You can pop new plug plants between existing vegetables, when the latter are close to finishing.

Examples in late summer to early autumn include spinach between lettuce, spring onions under cordon tomatoes, and fennel between cucumber or between new spinach.

Do pay attention to innocent-looking weeds, which can set hundreds of seeds in September’s warmth. For sure, small weeds at this time are not competing with existing and established crops, which perhaps gives a false sense of ease about their presence. If allowed to drop their seeds, you will encounter difficulties through winter and spring when hundreds of new weeds may smother new seedling vegetables and young plants, and make more weed seeds.

It has been slug weather, and I am impressed how few we see. The one place with damage is where I spread some less-decomposed digestate, from a methane gas plant, anaerobically fermented rye and maize. So much difference compared to my normal compost mulch.

Some plants can be equidistant in all directions. My salad spacing is 22x22cm average, whatever the vegetables. If you space closer, plants live for less long.

Tall plants in tunnel or greenhouse are following the line of an overhead supporting wire, and these wires could be up to 90cm apart. Then cucumbers are at 60cm from each other.

Getting down to earth