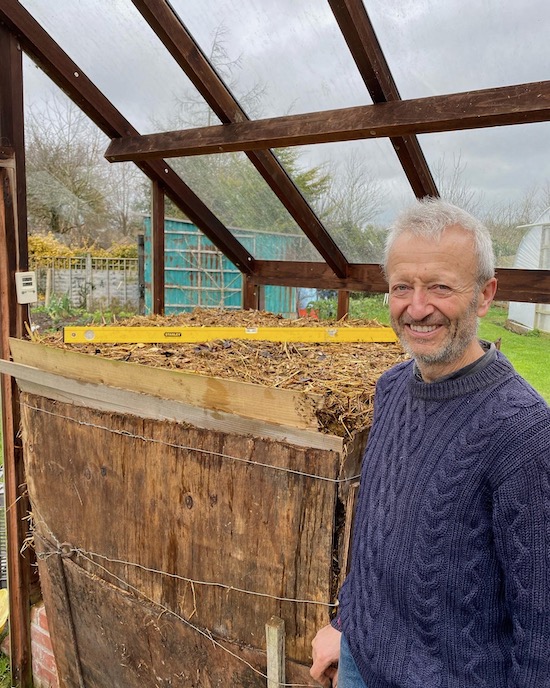 January was sunny and calm, February has been dramatic and especially with recent high wind. Nearby at Yeovilton there was a 72mph gust at 1pm on 18th (Storm Eunice), and I’m grateful that the damage was only to temporary structures such as the cage for netting over broccoli, against pigeons. I watched with some trepidation as the greenhouse literally swayed from side to side, but it’s still there! Woodpecker joinery‘s Chris & Louise fitted some braces last summer and I think they saved the day. Likewise the First polytunnels are all intact and did not move at all, the design is good.

The last time we had such strong wind was 27th October 2013 when there was a 76 mph gust, which blew off my garage roof. The atmospheric pressure dropped to 979mb here, this time was 986mb, with more rain in 2013 than yesterday – 20mm compared to 2mm.

There are more high winds coming over the next three days but maybe not quite so severe. Wind can be a sign of season change and there are hints of spring in the air, the birdsong and the new growth of plants and flowers. Spring is in my webshop’s great offers on online courses, available in modules, lessons and bundles including all three together. On the modules page, see the Taster offers of £5 modules to give you an idea of what each course contains.

We have reorganised the online course quizzes by removing the need for 100%. Anna discovered that this allows you to see which are your right and wrong answers, and I’m sorry for the frustrations this has caused.

More on the weather

Weather has always been my keen hobby. This has served me well in gardening because it’s such a key element of everything we do, and Edward had the idea to make this video where I could explain more about it. In gardening, you need to make strategic decisions according to climate, which is the long-term average and gives you probabilities of success. Within that framework, is the interest of weather variations which influence our success.

I’ve seen enough in 49 years of recording weather to have great appreciation for the ups and downs. Despite recent heat in summer, we have not had anything here like 1976. Despite recent winter dramas, there has been nothing like 1963 – I was four years old and remember igloos in the garden. The weather often feels extreme. Some of you might be wondering if I’m denying climate change and that’s not my point, it’s more about expecting and dealing with the drama. It sounds like there is even more in areas of continental climate, mountain, desert, or somewhere like Patagonia for wind.

I was heartened to see on social media how many people have been sowing since Valentine’s Day,  such a lovely time to begin. It coincided amazingly this year with being two days before full moon, which gives a strong start. I follow the moon to some extent but mainly I follow the season, and day-to-day life as well! Sometimes meaning that one is not sowing on the perfect day.

Please see my timeline and Calendar for best vegetables you can sow at different times of the year. Discover more in my seeds & sowing online course module, half price until 20th February. Remember that all advice at the moment is geared to sowing under cover, while I suggest first outdoor sowings after the middle of March, such as carrots and parsnips.

We multisow many vegetables in module trays, and some in seed trays to pick out, and keep all trays in the house for 5-9 days because that gives night-time warmth to speed germination. Germination does not need light (except celery). Then seedlings go into the greenhouse, once I see leaves: at that stage they do better for having full light.

The greenhouse is not heated, which in our climate it’s not a big deal because it’s not too cold. Night temperatures are higher than outside but not by much: if there’s a -5 frost in the garden, it might be -2 in the greenhouse. All the vegetables sown at this time are frost resistant, unless you sow aubergines and peppers (no rush though).

The hotbed we create in one corner of the greenhouse is not a space heater, it’s to warm the module trays sitting on top. It’s not an economic proposition, in terms of needing four hours work for two people to fetch the manure in my car trailer, and wheelbarrow it into the structure you see of 1.2m/4ft square, which we create during the process of filling using plywood and wire. It’s simple to erect and quick to dismantle in early June.

The manure is fresh as in two days old or less, which means more heat. The bedding is mostly straw but there is some wood. Straw gives more heat and decomposes more quickly so that’s why I prefer it to wood, because I value the finished compost after one year. Before using that compost, we do a weedkiller (pyralid) trial with broad beans. Early indications are that it’s okay, details of testing are in this video.

Two P’s are better than three (Precise) because so much weather and life will intervene between plan and planting. I do a rough sketch only, and am happy also for the flexibility afforded by not practicing a four year rotation.

One of my trials is to grow potatoes in the same bed every year. Last year was the seventh, with good results, so this will be year eight and using homesaved Charlotte seed potatoes. See photos below and this webpage about the trial area.

If you have some weedy ground and want to grow vegetables and flowers and fruit bushes, any time from now is good to lay covers which exclude light and kill weeds. Some covers feed soil life too, the photos show examples. There is no right or wrong method, just many possibilities –  see this video about mulching Homeacres new area at this time last year.

It’s good to understand which are the most appropriate mulches/covers. according to space and materials available. See my late February video on YouTube about this.

I’ve decided to make a full video about woodchips, because they hold so many possibilities and that one word encompasses so many variations. All of which leads to no little confusion! I’ve been spurred on in this by communication with Brian Pratt from Michigan, recently retired and a keen gardener, on a mission to educate people about woodchip in the garden. He has noticed confusion arising from Paul Gautschi’s original Back to Eden, where Paul is not always clear about mulching the vegetable garden, where he uses woodchip in a composted state, unlike around the trees where he’s using woodchip.

On pathways you can use wood chips in a fresh state, especially if they are from wood of the past year, also called green wood as opposed to old trunks! Preferably they have been chopped in small pieces, and they can be coniferous. If you want to age them it’s easiest to leave them in a pile on the ground, making sure to keep them moist. The photos give an idea of other ways to mature them!

We are filming on Wednesday with Alessandro, for a video release in early March.

My main motivation in growing vegetables has always been their flavour and health giving properties. Your own fresh harvests can bring you much health, not sufficiently recognised until recently, and now I’m encouraged by the attention paid to microbes. This links beautifully to no dig practice, which builds populations of beneficial microbes in soil, similar to those we need in our guts.

In other words, when we eat fresh garden produce, we are giving ourselves health. That is a much bigger statement than avoiding disease. Health is a positive state, of feeling energetic and keen.

Find out more – I’m working with Alessandro @spicymoustache on Instagram, where his excellent reels are giving super recipes, such as this beetroot ketchup.

I do this every year, and I continue to be amazed at the resilience and beauty of these plants, all through the winter and early spring. They include Grenoble Red lettuce, mustards, salad rocket, land cress, endives, chervil and claytonia.

Most of these would survive outside. However they do not give such healthy harvests in mid winter and because I’m growing for sale rather than for eating at home, the leaves need to be high quality. This winter we are getting nice results from outdoor chervil and claytonia, thanks to the mild weather, and mustards under a mesh cover are growing well.

There is just one plant I do not grow in winter for a salad leaves and that is wild rocket, which nonetheless I do sow in September. Then it’s in pots in the greenhouse until February when we plant it out, with a mesh cover over.

This is a rapid job and highly worthwhile. Every month or so through winter we go through the cabbages, broccoli and Brussels sprouts to remove the yellowing lower leaves. With these cabbage we always find quite a few slugs, which go on the compost heap as well as the leaves. The plants then look fantastic and suffer less pest damage.

Soon the first spring cabbage will be ready because I’ve planted them close enough to remove a few in succession. First harvests are extremely welcome as spring greens and then later harvests have something of a small heart, with more blanched and sweet leaves. They are mostly Wheelers Imperial, see this cabbage growing online lesson.

Small garden (2) at winter solstice: the harvests and my plans for 2018

Converting wastes to grow food, reducing waste in the garden

Article: Getting down to earth