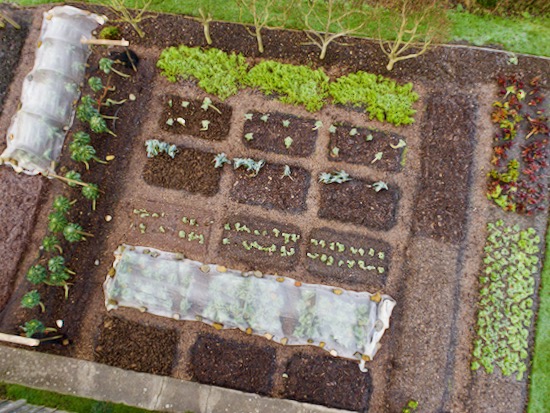 Slowly the energy rises in February. I love the feeling of growth stirring, but be patient before making first sowings. I wait until mid February, then sow under cover radish and turnip multisown, lettuce, cabbage of an early variety, calabrese (broccoli of early summer), cauliflower, also onions, spinach and spring onions multisown, and coriander, parsley, dill. Looking ahead, I sow beetroot towards the end of February and tomatoes mid-March, chard and leeks in early April, cucumbers for under cover growing in mid-April. My new Skills book with Calendar has all the information you need, also I have posted a how to sow video.

Timing is important: two weeks ago I was upset to see a well-known seed company recommending their customers sow tomatoes, in the middle of January. This is possible, but for most it’s not practical, resulting even in wasted effort and seed, because it results in large plants by late March when it’s still too cold to put them out even in a greenhouse. With early and in fact all sowings (see this module about seeds and sowing), it’s as much about whether the temperature will be correct when plants are ready, as whether the seedlings will germinate and grow.

It’s been fun to have the glass window into a compost heap and now the contents look quite evenly brown. One characteristic of the compost we make here is a fairly high proportion of small woody pieces, which help to keep it light and aerated and increase the fungal content.

We never sieve it and I value the small pieces of wood as part of the surface mulch for beds. It’s one reason why the soil here is quite white in places and smells of mushrooms! We spread around 2.5 cm/an inch of this compost on beds (measured after it settles), once a year for two crops, and never use feeds or fertilisers. The pathways have woodchip.

See this page of my site for advice on making compost, and this video.

The first photo below shows the profile of my beds and paths, with the beds only slightly raised. They both have the same depth of mulch material, compost on beds and in this case, old woodchip on paths. You could spread fresh woodchip. Whereas I like to age it first so that it’s already slightly composted, and the goodness is more readily available to soil organisms.

We have finally had what I would call some moderate frost of -6.7 C, around 20 F, and that was enough to dispatch the pak choi. On the other hand plants like chervil and Claytonia are thriving, without protection.

I had a visit from Andy Murray, a chef, writer and soil ecologist who lives locally, and brought his special camera lens. I did not know much about springtails or collembolans, and certainly had no idea how beautiful they are. He found quite a few under a brick which was lying on some compost. They eat mostly decaying matter.

Mesofauna are 0.1 to 2mm in size, invertebrates including earthworms, nematodes, molluscs and what you see in the photos.

One of the three strips in this trial has beds which we fork every year, to loosen soil without inversion, and the compost is applied on the surface, not incorporated at all. That first strip has the same type of compost as the second strip, which is no dig. The third strip is no dig and has a different compost which is cow manure.

During the first six years, strip 2 outperformed strip 1, but lately the variation is less. Forking this soil to loosen it does not increase harvests and is a job not worth doing, here at least. I would imagine that forking breaks some of the mycelial networks.

The measure of harvests from this trial and the one below are of kitchen ready vegetables, after trimming anything you would not eat. Each strip measures 2 m x 9 m (6.5x30ft) and comprises six beds. There is within this a no rotation trial where for example bed 4 of each strip has potatoes and leeks every year. With excellent crops so far, including year 7.

Anna created also the same kind of bar chart for my two bed trial, comparing dig with no dig, both beds having the same amount of compost every December, and exactly the same plants on the same day and the same harvests on the same day. Over nine years the harvests are 855kg dig bed, 953kg no dig, beds measure 1.5 x 5m (5x16ft). Any variations in the harvest totals are a combination of weather, and some changes in the cropping.

Last year the dig bed performed slightly better than in previous years and I wonder if it’s from removing the wooden sides in December 2020, allowing entry to the dug and disturbed soil of fungal networks. The pathway soil is in very good condition thanks to mulches of well-decomposed woodchip.

I still have one or two videos created by Edward last year, including the winter harvests of salad leaves under cover. Edward now is dedicating himself to his final year at Edinburgh University, studying history.

I’m working this year with Alessandro of Spicy Moustache. He is quite the professional and is being very successful recently on Instagram with his reels, do have a look.

I have three children (eldest is Rosalie) and the second one is Edward’s older brother Jack, who runs a business working with diggers and tractors. He’s very proficient at using the machines and has a good understanding of how water flows, or doesn’t, and he was here for six days in early January creating the pond. We shall post a video around 8th February.

Our problem is that there is not any spring, or regular supply of water. His best solution was to dig out some of an existing ditch which had filled in, and to run a pipe underground from that into the pond. The dug-out ditch serves as a catchment area/reservoir and is slightly higher than the pond, to enable flow of water. However if it does not rain, the pond level slowly subsides, as is happening at the moment.

We were fortunate that after he finished the main work, it rained a lot! About 30 mm/1.2 inches. The pond has no liner, no plastic. The puddled/squashed clay is what holds water, but it looks like there might be a slight leak somewhere: we are learning.

And the next project is to plant the edges, which Adam made a start on during very frosty weather, which was handy because his boots did not get so muddy from the disturbed soil and clay. The mess of this process has made me very grateful for no dig in the rest of the garden.

In the right-hand photo below is Kate, on the left, and she has worked it over the last two years, as well as cooking for the courses. Now she is starting her and CSA near the south coast and they are crowdfunding, do have a look.

54 thoughts on “February 2022 how and when to sow, compost for no dig, trial results, mesofauna, pond creation”