The Food Garden in January

A brief entry this month because January is a quiet time in the garden, and also because you can find a lot of advice in December’s archived piece, especially with regard to keeping your plot weed free and spreading compost on top of any bare soil.

In the milder west there may still be some leaves to harvest – many salad plants survive frost, although they may not be growing much while it is cold. The photograph to the left is of Ruby Streaks mustard, taken in mid December, before the final week of temperatures as low as -5C. Those harder frosts have caused some of it’s outer leaves to rot, although the plants are still alive. Golden Streaks mustard looks healthier. 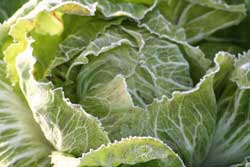 The photograph to the right is a of radicchio Variegata da Lusia (Seeds of Italy), which I have found to resist frosts down to -5, especially when it’s hearts are still a little loose. The one in this photo has a reasonably well developed heart and is nearly ready to pick. When the outer leaves are removed, it’s inner heart leaves reveal their gorgeous pink and maroon striations, which look fantastic in a winter bowl of leaves. See my book for cultural details.

The photograph below shows radicchio Treviso Tardiva on 23 December, after a fortnight of frost. It make a loose heart of thin, crimson leaves and also it’s root can be dug up and used to force chicons, in warmth and darkness. 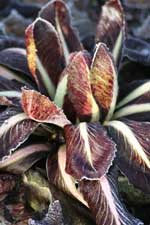 The only sowings I make in January are of lettuce and spinach in the greenhouse, for planting out under fleece in early March. They are to catch the early market for leaves while for most gardeners I recommend first greenhouse salad sowings in February.

Some writers advise sowing tomatoes, peppers and aubergines in January but unless you have a reliable source of warmth to keep frost out and maintain enough warmth for them to grow steadily, there is little to gain from being so early. I sow them in early March, for planting in tunnels in mid May.