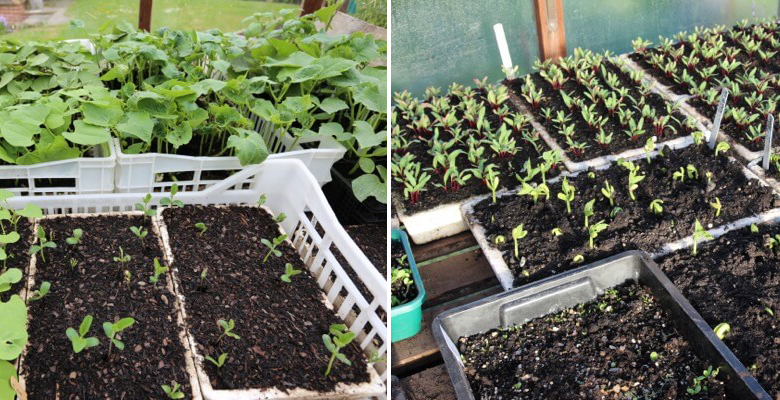 I hope that May has been a good month for your garden, and here it certainly has. Daytime temperatures were the warmest for May since 1990, but nights were cooler until recently. Sunshine for May is way above average and rainfall way below. All plants have enjoyed the conditions, and moisture retention from the no dig method has helped enormously.

Good to sow in June

Roots for autumn and winter can be sown now and until about mid month: carrots, beetroot and swede. Later sowings are possible but will be smaller at harvest time.

Sow French beans any time in June. We do a second sowing of lettuce in early June, and some early chicories, plus Romanesco cauliflower, kale and purple sprouting broccoli. The latter grows well here from sowing 16th-17th June, when I also sow calabrese for October harvests.

Good to plant in June

Sweetcorn as soon as possible. Already some leek plants are coming ready, and you can plant them any time until about mid August. For later plantings, best pot them on or give them space in the row, if in open ground.

Here we suffer leek moth and cover plantings with mesh until September.

Brassicas to plant in June are Brussels sprouts, autumn cabbage, swede and kale.

Towards month’s end is good for plantings of beetroot to crop in autumn.

Undercover you can plant basil, aubergines, peppers, chillies, melon and cucumber if you have not already.

However other veg need cross pollination with nearby plants, and may be pollinated with less desirable strains. I have experience of that with some beetroot seed I was given. It is growing a lot of leaf and some of the roots are white, with chard-like stems. They are no good for selling, nothing like the prolific Boltardy.

Now is the season for filling those heaps. Here it needed three months to fill our first bay, partly thanks to cool weather, and it will be just one month for the next one to fill. As well as grass mowings and increasing numbers of crop remains, such as broccoli stems and leaves, we are adding verge prunings, coffee grounds and straw/manure from a neighbour’s barn clearing, cardboard, paper and wood chips I was given two months ago. They are already decomposing noticeably.

I am also trying a Dalek bin, what you see is five weeks of filling.

If you have not already, June is still good for pruning plumas, cherries and apricots. Also a chance to thin fruits, I just pulled off about 100 small Victoria plumlets, and left around 40 on a five year old tree on Pixy rootstock.

May is a frantic changeover month when we also replenish the soil, with a mulch of 3in/7.5cm compost. This is the only soil/plant feed I give until next May, so it’s good for a year of cropping, and I give no liquid feeds to summer crops such as tomatoes, again saving time.

Harvests in the hungry gap

There are less than usual. Overwintered broccoli and leeks finished on 20th May, so the main harvests now are leaves: lettuce, spinach, spring onion, pea shoots and coriander plus dill.

Brassica roots such as turnip, radish and kohlrabi have been tasty, but tunnelled by root flies in unusual number. With hindsight, a mesh cover would have been good.

Soon there will be Greyhound cabbage, broad beans and peas, then early potatoes, peas and carrots, a wonderful time of new harvests. Large, thick, 4.5” pods are superbly tender and delicious. In American Oregon Sugar Pod are a snow pea-type. Bush plants are high yielding and stay compact. Developed by Dr. James Baggett, of Oregon State Univ.

An incredible time of year. Just a week between the pea & lettuce photos below.

Last November Steph and I made new beds of compost on weeds, and laid fence posts on their sides to hold the compost in place, until it settles. Now it has and we lifted off the wood, found some slugs, laid a final layer of cardboard in the paths and a little compost along the edges, to round them off.

The mound is growing some nice veg, but also reveals some difficulties of mixed cropping/polyculture. In this case, beetroot leaves have been eaten almost to the ground by sparrows, yet I don’t want to cover the whole bed just for those few plants.

(see March for how this started)

The comparison between dig and no dig has shown vivid differences.

Dig beetroot, spinach and peas are poor, carrots were slug eaten, but potatoes and onions look good. There is no obvious pattern to it except for one end of the dig bed looking a bit stricken, now recovering somewhat.

The propagating hotbed is no longer needed, but I need the space to continue plant raising. I find it worthwhile to move the composting horse manure out now rather than when spring it in the autumn.

First, this serves to aerate and mix the materials

Second, this means less woodlice and slugs around my seedlings

Third, this allows me to grow aubergines, chillies etc on the heap outside.

Aminopyralid is the active ingredient of a weedkiller used on grass intended for horse hay. It is rarely used in other circumstances and not before making silage, so cow manure is free of it. The problem is it’s persistence as an active weedkiller, until soil microbes break it down. But you could lose a crop before that happens.

You can do a test by sowing any kind of bean or pea, or planting a tomato or potato. They are highly susceptible and if the poison is present, their new leaves will start to curl inwards.

I have received photos of it this year, affecting broad beans particularly, and the two sources surprised me. One gardener had bought Levingtons organic farmyard manure, the other had bought composted manure from the Compost Centre in London.

Find out more in this forum thread, where Mark Webb writes:

I find it extraordinary that all gardening programmes and many magazine articles recommend using horse manure but I have never seen a warning of the risks. I suspect that many gardeners suffer the consequences of herbicide in horse manure and never identify the cause of their problem.

Some interesting topics recently include this discussion about no dig for flowers. The compost mulch does not result in over-lush growth because it’s main effect is feeding soil organisms and maintaining a balance of healthy food, with no excesses.

Another thread, shock horror is about the small number of weeds in an allotment bed of onions, and the disbelief of there allotmenteers.

An allotmenteer from Tauton, Alan Cavill who is hugely experienced in growing vegetables, told me that his no dig onions are in a minority for growing strongly without watering, and for not bolting. The soil is quite light on his site and after digging or rotating, new plants struggle to establish roots in a surface that dries rapidly. Perhaps this is why the peas, spinach and beetroot are so poor in the dig bed of my experiment.

My allotment started off as a cutting garden 11 years ago.  It has evolved into a no-dig potager style garden, with some beds dedicated to flowers, some to fruit and veg, and some where flower planting becomes part of the crop rotation plan.

Like you, I was at first worried about the quality of blooms from the beds that I dress more generously with compost.  However, flowers grow strongly and flower abundantly – and I think they sometimes do better in the “richer” beds, especially in long dry spells – as they probably have access to better reserves of moisture.

A major confession – I have never managed weed free no dig!  This is partly because I rely on annuals (and some biennials) self seeding.  These volunteer plants are much more vigorous than those from seeds I sow and provide many more blooms. I notice this especially with sweet rocket, cornflowers, calendula, ammi, and cosmos (the latter has no problem at all with self propagating and flourishing in compost rich soil!).  Sunflowers, reputed to be greedy plants that leech all goodness from the soil, benefit from the conditions that no dig can provide, as do sweet peas.

So if my experience is anything to go by, rest assured your cut flower garden should thrive on no dig.  The added benefit is the wonderful variety of insects the blooms bring to the garden – as well as comments from appreciative passers by.