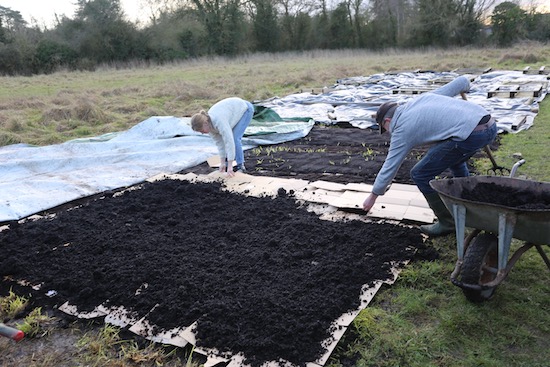 Cold weather has been gripping much of the northern hemisphere this February so far, but days are lengthening! Some sowings can happen now, but there is no rush and see my comments below, where also I describe what we are doing on the new land.

My new video is proving popular: compost is such an interesting topic! And the You Tube channel is just reaching 400,000 subscribers, at the same time as Instagram reaches a quarter million followers. On You Tube there are many How to Grow videos, worth a look at this time, such as onions multisown, and lettuce.

on 20th February I am giving an online class by Zoom to West Dean College, only wish I was going there! Thanks goodness for gardening, and online.

During the summer months here, pigeons eat elsewhere, but are now enjoying my brassicas, see my previous post for ideas on prevention. And mostly we do not suffer from rabbits. However at the moment one or two rabbits come in the garden every night, looking to make a new burrow, which unfortunately involves digging! Every morning I fill in the holes.

We I have not had a great deal of snow here, and the lowest temperature has been -5 C 23 Fahrenheit, so not too bad! I am impressed by the plants growing in the new bed we made in late November, for the video with Kevin of Epic in San Diego. The only two failures are lettuce transplanted, and spinach direct sown.

Although winter has been colder than average, the grass has still grown a little and when that is happening, there is some advantage to covering with mulch as early as this. There is no rush, but it’s a good job for winter, find the details in module 4 of my online no dig course.

I feel behind the game, having bought the land so recently and been uncertain of whether I could do this. Just today I am taking delivery of some mushroom compost from Woodland Horticulture, [email protected], and I took delivery of some green waste or municipal compost as well. For the existing garden I have sufficient home-made compost, but need more as a one off purchase for making new beds.

There is no prescribed amount to use, and if you do not have weeds you can make great beds with 5 cm/2 inches compost. Here we shall be closer to 10 cm, and I still have a heap of soil from building the cabin so we are putting a little of that as a base layer, to save on compost. That is still not enough coverage to stop the vigourous weeds from regrowing, so I am keeping polythene over the ground until spring, for light exclusion. See my no dig course book 1 for detailed advice.

The grass regrowing looks like Timothy or Cocksfoot, not couch, although there is some in places, also bindweed for later. Probably I shall keep the polythene on until mid spring and we shall grow potatoes, squash and larger plants, rather than trying to sow carrots or plant lettuce in the spring. There will be quite a few slugs initially, and possibly leather jackets too.

My son Jack (Edward’s older brother) is an agricultural contractor and he has helped out by topping the old grass, which has tussocks of woody stems, making it harder to mulch evenly. The field now looks brown but will soon be green again!

Also we can see the undulations, which makes it easier to work out where a pond will be good. Before that can happen we have to apply for planning permission, so nothing is yet certain.

Much as I love teaching in person, there is now so much need for online learning that we have pushed on this winter to get two new courses out. The first one will be ready next week, course 3A, how to grow vegetables for the first half of the alphabet, from aubergine to cucumbers. Cucumber is halfway to the 30, because so many vegetable names begin with C – it’s a good initial!  Then Course 3B is fennel to tomatoes, the second 15.

Each lesson concentrates on one vegetable, which I explain within the same outline structure. The aim is for you to understand each vegetable’s special needs and qualities, so that successful harvests are likely. There are quizzes for each lesson, and exclusive videos for two thirds of them.

I explain types and varieties, sowing methods, how to transplant, watering, ways of picking to maximise output and quality, storage, pest protection, clearing and what to plant next. More details next week, the price is £160 and soon it will be available lesson by lesson, although our first aim it to get the whole course out, followed by Course 3B by the end of March, or perhaps earlier. PS Course now available, link in header.

First sowings under cover, no rush to sow

Valentine’s Day approaches, although the weather is not cooperating! Actually it does look like turning milder next week, but not in the north east. For many of us there are now some sowings good to make, but there is no harm in starting later if the weather should stay cold. Sowings in spring have time to catch up, don’t worry if you are late by the dates in my calendar. They are the first dates and not the only ones! Thanks to a waxing moon, I plan a big sowing 24th-25th February – growth energy is strong for seeds sown before but not at full moon.

This weekend and on Monday I hope we find time to sow peas for shoots (not pods yet), broad beans, lettuce, spinach, onions for salad onion and some for bulb onions, cabbage and broccoli of early varieties, cauliflower, parsley, and turnips plus radish multisown. All of these will spend at least the first five days in my house, where the nights in particular are much warmer than in the greenhouse.

For germination of seeds you need steady warmth, and no light is necessary, just to be sure to have somewhere light for seedlings once they emerge. I have bought a small grow light kit but have not had time to put it up yet. Also we shall make a hotbed in the greenhouse, of fresh horse manure, for warmth once seedlings are growing (electric propagators are good!) – see this propagation video for more advice, and module 3 of online course 2.

I am sorry for difficulties purchasing the module trays I designed. Containerwise were amazed at such a strong demand, and are just catching up now by shipping back orders, plus they have found new distributors. Including I hope for mainland Europe where it’s now nightmarishly difficult to export anything from Britain. Containerwise had to stop exporting trays, after many were returned for incorrect paperwork, and it was costing them a lot of money.

We were approached by a company email who design and sell T-shirts and sweatshirts made from organic cotton. I am happy to say that after many months of working on and deciding various designs, we have some clothing available on their website. Just when I needed to model a couple of shirts, there was a brief burst of warm sunshine in late January, quite amazing! I would not have been doing this last week. Between the shirt photos I slipped in a new creation by Louise, in compost!

Celeriac overwintered in the ground

A few celeriac got left behind in the garden, and it was interesting to see the quality when I harvested them last week. There is some rotting happening from the top, although most of them are still good to eat. What I saw reinforces my feeling that most winter root vegetables are better in store than in the ground. Even my Swedes/rutabaga are being nibbled now by rabbits!

These celeriac were popped in for a photo shoot last May, and then were overgrown by nearby sweetcorn and French beans. I am quite surprised there is so much to eat! Celeriac needs less attention than celery for sure.