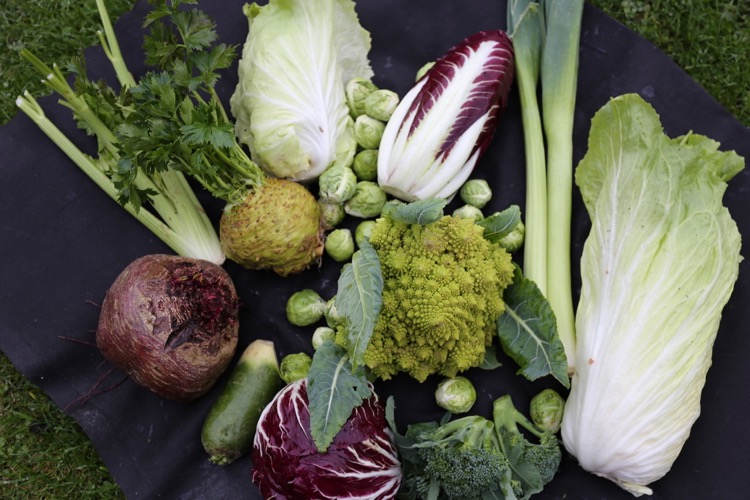 October was wet and November could be cold. I hope that frost won’t hurt some late harvests of fennel, which I want to cover with fleece. Most other autumn veg can stand light freezing, including cauliflower, cabbage hearts and many salads. However if you hear mention of -2C or lower, I would take the harvest and store, or cover. Use thicker fleece, 30gsm.

From now until year’s end is a top time to feed soil organisms with a compost mulch, using enough to cover the surface of beds, after removing crop residues and weeds. I just received a report on Homeacres soil biology from Microliv in Norway, and it’s interesting to see a description of the organisms in my soil.

It’s worth buying some compost for new beds say half tonne for a bed of 1.2x2m/4x7ft, when spreading at 15cm depth. The compost can be lumpy animal manure as base layer. Or if starting no dig with clean soil, just do a light weeding of all you see, then spread 4-5cm/up to 2in compost of any kind.

If weeds are many, place thick cardboard directly on them first, with 7cm/3in of compost on the cardboard. By spring the cardboard is soft, even decomposed, so perennial weeds may appear and need pulling out, while you can also sow and plant, because new roots will travel down and into the undisturbed soil.

3-5cm/1-2in compost is a maintenance ration for feeding soil life through next year. It’s the only thing I add to my beds, no feeds or fertilisers, although I am looking to use some rockdust, more on that in my next post.. All beds receive the same dose, whatever they are going to grow next year.

These are damaged by frost, so gather them today if you have not already. We have been eating Crown Prince already, and the flavour always impresses me so much. These squashes weigh 3-4kg/6-9lb and came from four plants, which required no maintenance: I do not prune them, nor place anything under swelling fruits.

Aquadulce Claudia is my top variety, and I save seed every July-August to ensure excellent germination and top quality growth.

I find it best to sow under cover in modules, with a mousetrap nearby. Do not multisow, these plants make many stems from one seed.

Shallow modules are fine because the tap root can coil around and it grows fine after transplanting. I sow under cover because direct sowings here often get eaten by rodents, or pulled out by rooks when just appearing.

After sowing, wait about four weeks before planting. Then give the seedlings plenty of space, because they will tiller as the days grow longer in spring, often finishing with four or five strong stems from every seed.

Even in October, new growth

Every year we set out small plug plants or modules in the polytunnel and greenhouse (plus a few outside, to see), in October’s second or third week.

Every year I am amazed how much they grow, after spending the first week doing nothing except to settle in. Some call it “transplant shock” and during this time, I often need to fill holes of eaten plants (slugs and leatherjackets) with spare module plants – it’s good to have leftover plants.

Then suddenly at about this time, I can see the new growth every day, and I feel reassured for the winter ahead.

An easy to grow vegetable, although needing protection from deer. See my video for how to grow these lovely heads.

Eat raw in salad, or baked in the oven with a little butter or oil: the sweetness of self-blanched hearts balance their inherent bitterness, which is a great tonic for the liver.

Cabbage and cauliflower harvests in autumn

Filderkraut cabbages are incredible. This year they are making hearts of 2-5kg, up to 11lb after trimming. Plus they are second crop after broad beans, which gave a last harvest on 13th June, then we planted the cabbage straightaway, from a sowing of 9th May.

I sowed the Romanesco on 9th June and planted after final harvests of spring-planted kohlrabi, with mesh over for 6-8 weeks for protection from insects. The heads resist some frost, and if I see a one developed when nights below -2C are expected, I cut an older leaf to drape over the centre of each plant.

The two Brussels sprouts varieties are an early cropper, Marte F1, and a late cropper Doric F1. I love Brussels and this means up to six months harvests from one sowing and planting. They were even planted between carrots so they are a third crop of this year in that bed, because radish were first to crop in May, sown with the carrot seed in March.

The Chinese cabbage are so, so difficult to keep pest free: Despite mesh and Bacillus thuringiensis, I lose about a third of heads to caterpillars, just one fat on in the middle.

I taught two one days at Birr in Ireland recently, and shall be back there mid April for two more days. Back at Homeacres we have been busy making videos for You Tube, such as this one about second cropping, and for my new online course. The first online course is popular, with much information about how to go no dig, and cropping examples.

Asparagus preparation for next year

The ferns are starting to yellow, so there is no more goodness going down to the crowns. You can now cut them off at ground level – we use a scythe, then lay the stems and remaining feathery leaves on the path between each bed. They decompose slowly, and treading them helps.

Plus we spread 3cm/an inch of compost on the narrow beds, and some volcanic rockdust on the further half, to see if it makes a difference. The rockdust may be great food for earthworms, as Homeacres soil is not gritty at all.