What I didn’t realise was that her climate, drier than here and with extremes of temperature, did not allow slugs to become a problem. I copied her mulching method of old hay on top of the beds – then suffered a load of slugs.
Hence my use since then of compost mostly, as opposed to undecomposed organic matter. It’s the best approach in this damp climate. Since then I have been impressed how compost mulch is so effective in many different climates, from the tropics to deserts to cold continental.

It’s always good to hear and compare, and I hope this page will inform and inspire you, wherever you are in the world.

We regularly get back-to-back 40C days in summer and the extreme heat is really hard on our plants/crops/yield.

We need to water at least twice a day but thankfully we have a water tank. When we started using Charles’ no dig method though and followed his advice to have coarse/large woodchips in the compost to begin with our beds now retain a huge amount of moisture even on extreme-heat days.

The good side is that we don’t get many snails, slugs, mould, mildew, as moisture/dankness isn’t a real issue.

Home grown compost: This has been THE game changer and one of the biggest takeaways from Charles’ approach. I have two compost bays setup – although mine are not half as good looking as Charles’ set up though! I’ve put my bays together out of old shipping pallets  (heat treated (HT) ones – another GREAT tip from Charles – thank you!). I have one bay for resting compost and one for active compost. I put EVERYTHING into the active bay from our garden AND from our neighbours’ green waste bins.

My name is Santiago and I’m from Chile

Many years ago my father tried to make a garden without no dig and he told me it was super difficult, time consuming and money consuming. So I was unmotivated.
Then I knew your no dig method and tried it and it is super easy! My father was amazed. Now for the most part of the year we made our own salads. We don’t need to buy lettuce anymore!

A beautiful no dig roof top garden. I am afraid there was quite a bit of lugging of material via the lift.

Petr took online courses one and two and is creating a garden on one acre of land in the countryside with wife and six children, surrounded by an “edible jungle”  full of fruit trees and bushes . Close to Bavaria. 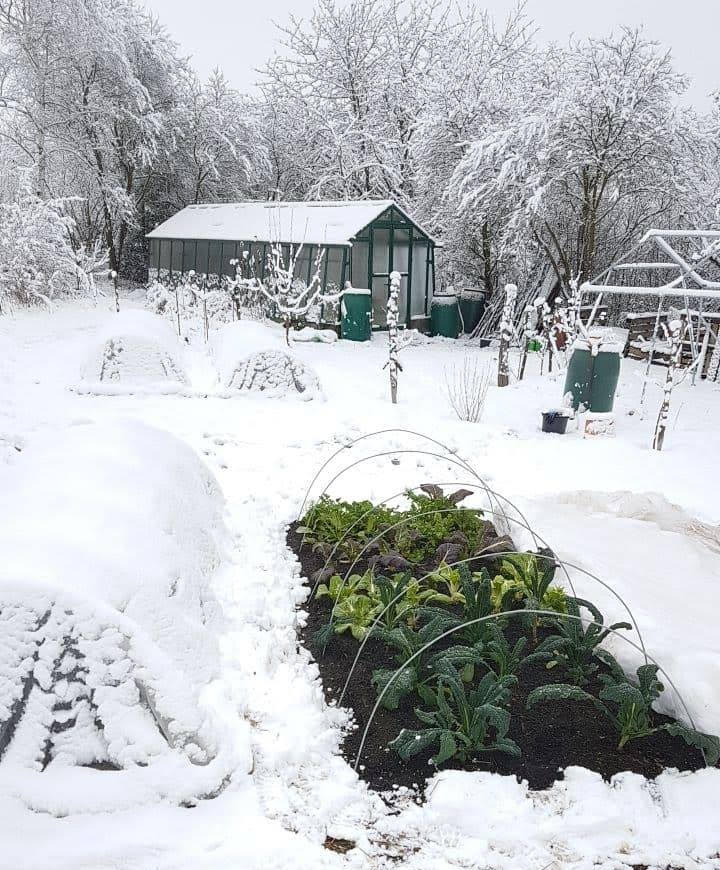 I did the bed myself, with little help from my 10-year-old son and my wife, took us around 6 to 8 hours.
Bought bare essential tools based on your videos (like wheelbarrow(2), spade/shovel(2), digging fork(2) (couldn’t get the compost fork though here), rake(2)) and lots of compost, exhausting budget for this month, hence postponed enrolling to your course as of now 🙁

Metsje and Gerrit in Friesland

Just five months earlier this area was grass and weeds. Metsje and Gerrit have created a beautiful no dig garden.

Every year I would till my garden. I’m almost 77 years old. I’m in very good shape for my age, but it’s getting more difficult to till. The ground is hard as a brick. I was looking on the internet and accidentally came across Charles’ youtube channel. I looked at it and evaluated it in light of what I had been doing (tilling) for many years. I thought I might be able to do this, so last year I made my initial beds using both mushroom and green compost that I purchased. While doing that I made two compost bins so I could start my own compost (which I now been giving away!!!).

Last years garden produced about 20 kg of half-runner beans, 60 kg of sweet potatoes (from 8 plants), some broccoli, radishes, spinach, and tomatoes. It was not impressive because I don’t think I made the beds deep enough (about 3cm). Weeding is a breeze!!!!

However, our potatoes did not do well. This year the potatoes are growing very well. We will probably harvest in June. We’ve never been able to grow carrots but this year they are doing very well.

I also bought Charles’ book and it was very beneficial. Currently, we are trying to grow Sweet potato slips and then plant them. Stand-by for more information on that (LOL). We also found a hoe like Charles uses and it is wonderful. I’m thinking about expanding next year to add another 50% to the garden area.

We purchased this home in 2010 from a man who was 203 years old.  The house had sat empty and uncared for for ten years, so the entire property was overgrown with brush and vines so one could not even see the house.  Ten years later we are just starting to see our dream take shape.

I am so grateful to have discovered this technique of no dig gardening.  I might have gone the rest of my life and not stumbled upon it.  Like many other people, I used to be overwhelmed with weeds by mid-summer.  Now I feel like I have found a gardening method that is physically easy enough for me to continue with as I grow older.

William in the Nevada Mountains

I have been a farmer and rancher all my life and we grow the majority of our own food. We just finished building a greenhouse. I have been calling it a high tunnel but it is more accurately a walipini, it is dug into the earth with the  north wall built of boulders that hold thermal mass. We have six growing beds 100 ft long and 3 ft wide, plus more growing space in pots and in the stone walls, a total of 2000 sq ft. The thermal mass is working! we have not had a frost inside yet and our coldest nights have been down to 5 degrees fahrenheit. Our advantage is a climate where we get a lot of winter sun that heats the stone through the greenhouse plastic and keeps things warm at night. The round wood door you see in the picture is 10 ft tall and 4 ft wide. I built everything you see here. I did the excavation, stone work, steel work, and I installed the steel frame and plastic with friends and family. In another year I will be releasing a film about building it and growing food for the first year.
I love unusual vegetable varieties and I have never seen pointed cabbages until Charles showed them in the videos. (Well… I have grown Early Jersey Wakefield but it is not like yours!!!) I was inspired and tried to purchase seed. I searched for days to find Fielderkrout and there is only one supplier I could find in North America. I ordered it!
I have done no till farming for a long time but you have taught me many details that have really helped me understand the efficiency and productivity of small garden spaces. My plan was to have a no till system in the new walipini all along and to experiment until I figured out the best ways… but now that I discovered you I am doing No Dig in my new walipini because you have already figured it all out! Thanks again!

We tried your method, and it was a success! I’m attaching some pictures showing different states of the garden. The first picture is shortly after we created the new raised beds in April by first putting down cardboard and paper grocery bags and then adding a layer of compost. The later pictures are from July – September. This was a challenging area to plant because it only gets full sun for a few hours a day. Add to that our short growing season and I think it was quite successful! We have to have tall fences to deter the deer and bears (black and grizzly bears).